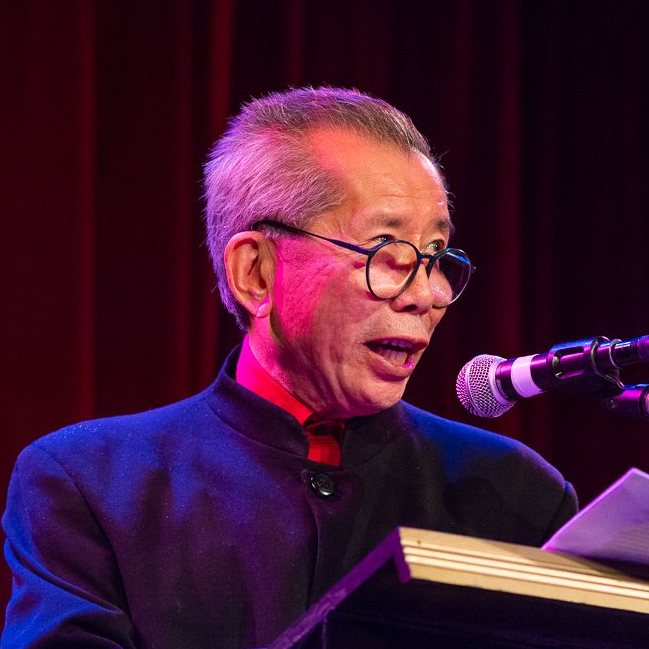 This week – William Yang. William moved to Sydney from North Queensland in 1969 and worked as a freelance photographer documenting Sydney’s social life including the glamorous celebrity set and the hedonistic, sub-cultural, gay community. In 1989 he integrated his skills as a writer and a visual artist, and began to perform monologues with slide projection in theatres. He has done eleven full-length works and toured the world. William continues to work across theatre, photography and film, and he also teaches storytelling workshops.

If you’re based in Sydney, you’ve definitely seen him taking photos of queer events. Indeed, he often whips out his camera as soon as he says hello.

One day, when I was about six years old, one of the kids at school called me “Ching Chong Chinaman, Born in jar, Christened in a teapot, Ha-ha-ha.” I had no idea what he was talking about.

But I knew from his expression that he was being horrible to me. So, I went home to my mother and I said to her, “Mum! I’m not Chinese, am I?” And my mother looked at me very sternly and she said, “Yes, you are.” Her tone was hard and it shocked me, and I knew in that moment that being Chinese was some terrible curse, and I could not rely on my mother for help… or my brother, who was four years older than me, very much more experienced in the world. He chimed in, “And you’d better get used to it.” So that was my introduction to being an Australian-Born Chinese: ABC.

I knew from a very early age that I was attracted to men. These urges became more pressing when I was a teenager, although the feelings were all rather vague and unarticulated in my mind. When I was sixteen, attending Cairns State High School, I read the afternoon newspaper and there was an article in it about homosexuality. The article described what the condition was, and it named three famous ones in history. And when I saw that I thought, “Oh, God. There’s a name for it.” The shock of recognition rather hit me like a thunderbolt. I thought there were four homosexuals in the world…

I came to Sydney from Brisbane in 1969, the same year as Stonewall about which I’d never heard. Coming to a new town meant I was able to reinvent myself. I came out a gay man in the early seventies. I always say I never consciously came out as a gay man, I was swept out by events at the time.

I never had sex with another man until I was in my mid-twenties, which is rather late compared with my contemporaries, so I spent a lot of time in the seventies catching up.

The Seventies was a wonderful time for gay sex. We Gay Liberationists were throwing off the self loathing that we had absorbed from prevailing social attitudes. Many of us were discovering sex for the first time. A lot of experimentation went on in the seventies around gay sex; even heterosexuals were trying it.

Most times, being Chinese was a disadvantage, most people didn’t want to have sex with a Chinese. But, I found in the seventies certain people – often virgins – wanted to have sex with me, not that they found me particularly desirable, I thought in retrospect, but because I was other. I figured for them it was a try out, and if it didn’t work out, then it would be easier for them to deny that it ever happened.

Then in the Eighties, the gay community developed as a subculture, with standards of dress codes and appearance, toned bodies. It was very conformist. And since I did not fit into these categories, I found it harder to find partners. Of course, I managed to find some partners, although I never realised my best asset at the time; that I was young. I never found out until it was too late, when I was no longer young.

I was politicised by the gay movement. I realised it was important to be visible. I found that coming out was an endless process, it was always someone else to tell. The first person in my family I told I was gay was my brother, and then I told my mother, and I guess I came out to the rest of the family on television.

In my 1983, I learned Taoism, a Chinese philosophy, and this led to me to embracing my Chinese heritage, which hitherto had been denied and unacknowledged. People at the time called me Born-Again Chinese, and that’s not a bad description because there was a certain zealousness to the process. But now I see it as a liberation from racial suppression and I prefer to say I came out as a Chinese.

In 1992, I initiated Asian Lesbian and Gay Pride in Sydney. It wasn’t the first Asian gay group in Sydney but it brought together gay men and lesbians. Our first event had a seminar about gay and lesbian Asian issues. We talked about the politics of desire: How there was a lack of desirable Asian bodies depicted in the media, which led to the assumption that only white people were desirable. In fact, most gay Asian men who were born in the West don’t desire other gay Asian men, they prefer white men. It’s complicated because there are whities who will only desire Asian men. Still, the slang terms confirms the categories. White gay men who desire Asians are called Rice Queens. Gay Asians who desire white men are called Potato Queens, and the rarer breed of Asians who prefer Asians are called Sticky Rice Queens.

Many of the gay Asian men I met in the group came from all over Asia, and they were all different culturally. The cultures have different ways of behaving and have different attitudes towards to sex.  I remember some of the Chinese gays preferred to speak about sex in English because there was no precedent of talking about it in Chinese.

For the past 25 years I’ve been touring my performance pieces around the world. When i take my pieces to China, I always put in a gay story or two because I’m trying to start up a conversation in China about being gay. The Chinese never talk about sex, and they don’t have a very good concept about being gay.

Last year, I did a tour of nine different universities all over China, and I gave my talk. Then, there was a question time. There was the usual question, “Did I identify as Chinese or Australian?” And when I told them that I identified as being Australian, they were very disappointed because I look Chinese.

At all my talks, there was always a gay question, and often it meant that it was a gay student coming out to his or her colleagues. But, in Xian, I didn’t see this gay question coming. One of the people in the audience who I’d met before asked me, “What is your position: Top or bottom?”

He had no idea how inappropriate the question was in that university context. I think he had assumed with Westerners, anything goes. Fortunately, his English was so poor, no one understood the question he asked. Sophie, my guide, asked our minder Walter, “What did he say?” Walter replied, “He asked what is William’s position in society?”

In my old age, I find I’m becoming more sticky rice, although my partner Scott is Australian. We have an open, long-distance relationship. We see each other every couple of months and it works for us. We like seeing each other, and we equally like our time alone. We’ve been going together for over 20 years now.

I was thrilled with the same-sex marriage victory last year. It was a milestone in equality, although Scott and I aren’t planning to get married. I’m older than Scott, and I’ve given him Power of Attorney. This means when I’m old and feeble…

*William and Audience laugh together*

… he can legally make decisions for me, and I consider that more of a commitment than marriage; to give your life over to another person. So, I  guess I trust him. Trust and love – they’re similar, aren’t they? Thank you.