Sara Knox: In the Garden of Unearthly Delights 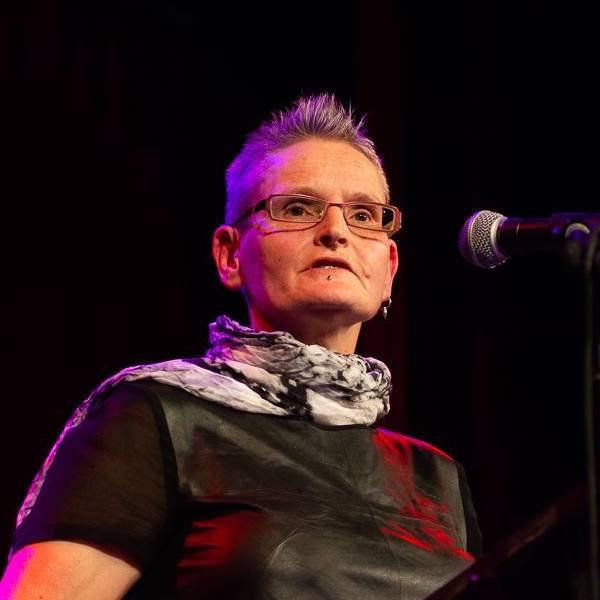 This week – Sara Knox was born in Wellington, New Zealand, in the year that country got television. She was raised in a family addicted to BBC dramas and books, where humour counted as the seventh sense. Her first novel, The Orphan Gunner, was short-listed for the regional Commonwealth Writers Prize, and won the Asher prize for the best novel by a woman about war, which is incredibly specific! I would like a prize for the Best Woman who Hosts Queerstories in Sydney, Melbourne and… No, sorry.

Sara has been a poet and essayist, and is the author of a non-fiction study of America’s long love affair with true crime. Currently, she teaches hair-raising stuff about contemporary attitudes to death and the representation of violence at Western Sydney University. Sometimes – not nearly enough – she writes true stories for a blog called What I didn’t Write. Sara Knox.

In 1998 I was in Orlando, Florida, in a spa hotel with no spa. It was my last day there and I was writing a letter to the me I’d be rejoining in Sydney – things I didn’t want her to forget but that I was having trouble thinking about. My printing doesn’t stick to the places meant for writing on. Under the silver icon for the Buena Vista Palace Hotel I have written, “37-pound white cat.” I can’t now remember what the 37-pound white cat had to do with anything. I’ve never practiced remembering. That was the point of the letter: To put the previous few days away from myself. I’d spent those days with a guy who was ex-Army Intelligence and ex-CIA – ex-human race, actually. A psychologically ruined individual in the tip-top shape you’d expect for the tennis coach-massage therapist he’d become since leaving the service.

Orlando’s main exports then were oranges and homeless people. The homeless people were sent out of town on a one-way bus ticket, leaving Orlando white, and clean, and empty, but for holidaymakers and people in hospitality; that was the attraction to the ex-Army Intelligence, ex-CIA operative. A blond coil of sinew and suppressed intention who’d picked me out of hundreds of people queuing for a theme park with an opening line that still amazes me. He says, “I wish I hadn’t sold my uniform. ‘You’d look great in it, and it would be about your size.”  I’m standing there in jeans and a t-shirt. There’s no sign around my neck saying, “I am a uniform fetishist.” He just knows.

The letter that I sent to myself never names the ex-CIA operative, so we’d better call him Charlie, or Mike, or Victor. “Disney World’s so clean and orderly,” says Victor, gesturing at the man-made lake and the pink flamingos standing on their reflections.  “Nothing ever happens here,” he says, shading his eyes. They’re very blue, those eyes, like the sky Disney has rostered on for the afternoon. “There’s no dirt here,” he says. “No violence.” He looks to the far shore. The Japan pavilion has just sprouted Taiko drummers. His thousand-yard stare could poleaxe goats. It was trained to do so, actually. In point of fact, or possibly fantasy, I will spend the next 36 hours, then the rest of my life, trying to decide which – fact or fantasy?

Without map or GPS, Victor can sense his way through the tangled highways of America, seeing the destination arise in his mind’s eye long before getting there and it’s this spooky grasp of space that the Agency recruited him for. He tells me this as we’re getting into the elevator in the Tower of Terror at Hollywood Studios. Darkness swallows us, then we plummet. For all the screaming, the ride is much less thrilling than Victor. He looks like a serial killer from the West Coast. He looks like the victim of a serial killer from the West Coast. I will spend the next 48 hours wondering whether he’s going to take me somewhere and kill me, but since I’m in the US as a bona fide murder expert it would be too much of a coincidence for me to be spirited off by a serial killer. Shit like that does not happen.

The letter I wrote to myself at the end of that weekend is full of shit that doesn’t happen. Before writing it, I’d telephoned my girlfriend in Sydney. She wasn’t a happy camper, though whether for me or about me, I couldn’t tell. It doesn’t take much for her to guess that I ended up having sex with Victor. “But why?!” she asks. That’s a good question, and I don’t answer it.

Which was part of all the things I wasn’t saying, for instance, about the aliens.

No way could I mention those little grey corpses on their gurneys, or the bigger grey corpses of their downed spaceships. I think of them as Little Grey, although Victor never stipulated the type or the colour.

“Don’t think about it now,” the 30-something me says to herself as she puts down the receiver. “Think about it later.” And I do, 20 years later. Now, actually.

It was Easter weekend. Every hotel in Orlando was booked solid, and since Victor has shown me around three theme parks, I figure that the least I could do was offer him a bed.

I’m still thinking he might be a serial killer, but what the hell? Watching television in my hotel room that first night, I try to winkle some proof out of him, something to persuade me of the world a GS-15 security clearance makes you privy to. “So… ” says I, “You were cleared for top-secret but the Air Force wouldn’t let you disembark at Papoose Lake because of what was in the aircraft hangars.”

Victor see-saws a hand. “I didn’t see what was in the hangars. That’s the point,” he says.

“And you’ve got a map of America in your head?”

“Show me,” I say, because anyone can say anything about anything; it doesn’t make it true.

“Stop me when you get bored,” he says, and he reels off the script of a Looney Tunes cartoon, doing the character voices and everything. Then, he recites Treasure Island.; I mean the whole book.

“Give me the bit where Jim is hiding in the apple barrel,” I say, and he obliges. In the end, I stop him, not because I’m bored but because I have a muscle cramp.

“I can look after that for you,” he says.

He spreads his fingers and flexes them. Army Intelligence training is useful if you’re going into massage therapy. One of the maps Victor carries in his head is a map of the human body, a map of all the places where pressure might be strategically applied.

When I turn out the light, Victor tells me about the time his people sat in on a Mossad interrogation. Events drifted to the point where one of the Mossad operatives was hacking the detainee’s arm off. Victor listened to the screaming, and watched the bloody rags accumulate underfoot. The room was small and windowless, and five men were crowded into it: One of them suffering; two of them watching.

That night, Victor starts out of sleep with a shout. He kicks at the bedding likes he’s trying to run out from under it. I don’t know what to do, so I don’t do anything.

That last day, after we’ve trailed round the Aerospace Museum, Victor swings by a pharmacy to buy condoms. By then I’m pretty sure he’s not a serial killer. He’s left the car running, with me in it.

On the evening of the last day, I take my final step off-world. The time machine that is my cunt – a time machine for one – takes me back past the 37-pound white cat, past the play-dough grey aliens in their aircraft hangars, past the Mossad interrogators in the room with the blood-slicked floor. I am brought back to myself with lurching finality, or to one of my selves: The 11-year-old me in the dark house up the road, the 11-year-old me in her cloud of shame, the one with the carpet chafing her naked back and buttocks.

That reality comes and claims me, and since there’s no room in it for the blonde-haired man who looks like a serial killer, I ask him to leave.

Dawn comes.  Before the call to the girlfriend, and the writing of the letter, I call my mother in New Zealand. “I’m lonely,” I say. “I don’t feel right.”