Razia Zakarya – Rebel with a Cause 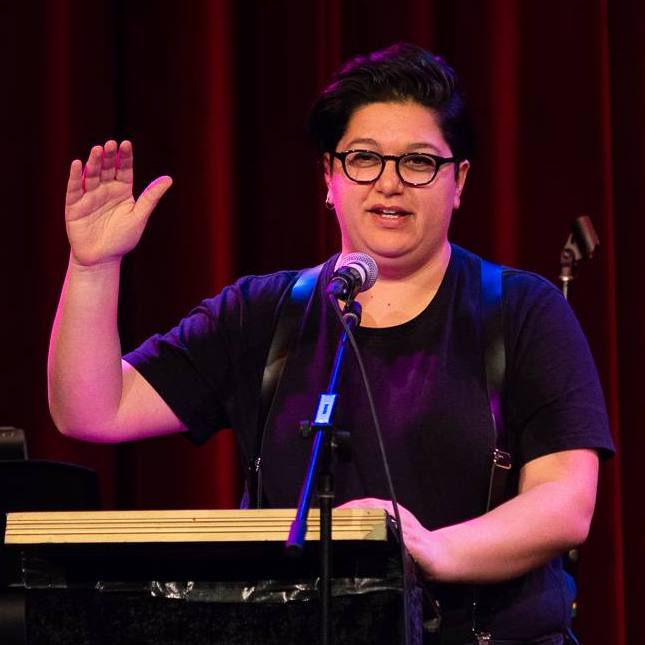 Razia Zakarya is a PhD candidate in Science at UTS. Her secret superpowers are mondegreens and malapropisms, and she has been described as a typical Aries; whatever that means. A version of this piece appeared in issue 10 of Archer Magazine, which was launched at Queerstories in Sydney in August. If you enjoy this piece or indeed queer writing in general, you should definitely subscribe to Archer Magazine. It’s a beautiful publication based out of Melbourne, an inclusive magazine that focuses on sexuality, gender, and identity. Razia Zakarya.

I was brought into this world by two individuals who knew all too well how fragile a society could be. Two individuals, now refugees, whose paths crossed in a foreign land, as they began a journey to another world where the social constructs seemed more in tune with peace.

I was born and raised in Sydney, Australia, and although my childhood memories include Aussie standards like Agro’s Cartoon Connection, driveway cricket, and running through the sprinkler to cool off, I was also brought up with stories of how great things were back home. My parents relished sharing stories of Afghanistan, this mysterious, bountiful land, and I listened just as enthusiastically.

As a child, I wistfully wondered what it would be like to live in a place where I wasn’t the only kid with my name like mine, and where my parents weren’t different from those of my friends’.

So when I was twelve and my dad told me we were relocating to Saudi Arabia for his career, a part of me was eager to go. I wanted to experience being part of the majority. The fact that I lumped being Afghan in with being Saudi was a testament to how Anglicised my worldview was.

It’s all the same. We’re all brown.

Being in Saudi felt nothing like I had anticipated. I felt no sense of belonging there. In fact, I had never felt more lost. The strict laws of the country, particularly those targeting women, were jarring. Suddenly, I was part of a group of people who were thought to be so subhuman that we needed basic tasks like driving carried out for us by men.

I remember my mum pacing the room, late for her shift at the hospital because her driver – of the correct gender – had slept in. It struck me as odd that an ER doctor wouldn’t be trusted behind the wheel, yet the same conservative types that upheld these rules would have to trust her with their lives. It wasn’t the first time I witnessed oppression defying logic, and it certainly wouldn’t be the last.

In Saudi, I learned that oppression wasn’t just systemic, it was tangible. It crept inside of you, it tightened its grip on the essence of your being, leaving a knot in your gut and a crushing feeling on your chest.

On paper, it could appear that Saudi Arabia took something from me but, in fact, it’s where my favourite part of myself was born – the rebel.

Conquer or perish. I was a teenager and I wasn’t going to let my vagina get in the way of me being me, so I did all the things I wasn’t allowed to do. And, anyone who knows anything about crime and punishment in Saudi Arabia knows that I was playing with fire.

The Committee for the Promotion of Virtue and the Prevention of Vice might sound like something from a draconian novel, but it was a very real government agency in Saudi Arabia that operated in its own jurisdiction. Officers from the Department were known as the Mutawa, and they had a reputation for being unrelentingly violent. Horror stories about run-ins with them were traded between expat kids like urban legends. Naturally, I was afraid of them.

This rebellious new side of me came to a head at the local shopping centre when I was approached by a Mutawa loudly accosting me for not wearing a headscarf. I had a knee-jerk reaction to keep walking and nonchalantly tell him to shut up.

The nonchalance was misleading though, I’ve got to admit. I remained alert as I walked away, only stopping to look back when I could no longer hear the hate pouring towards me. It was at that point that I realised the bully’s biggest weakness: Stoicism. Luckily, I came out unscathed and the oppressive machinery never got a hold of me or my spirit. Saudi Arabia was not my home, so it was natural for me to leave.

Back in Sydney, watching a VB ad, of all things, had me contemplating cultural relativity.

As the bubbles floated to the top of the schooner on the tele before me, a headline I had read in the Saudi flashed into my mind’s eye: “Man caught selling alcohol faces 1500 lashes, jail.”

All nations are entitled to their cultural laws and maintaining sovereignty, but being back in Australia left me feeling relieved that the place I called home allowed people to make their own choices. Now high-school aged, I was making new friends and planning my future, safe in the knowledge that I could make decisions for myself and would not be barred because of my gender.

It was a few years into high school that I came face-to-face with the complete image of who I was: A queer woman. Nothing can compare to the period during which I completely acknowledged my true self. It was equal parts exciting and terrifying. Identifying as queer felt authentic and left me feeling self-assured, yet I was also suddenly vulnerable to a new litany of criticism and self-doubt, finding myself a member of yet another oppressed class.

In Saudi, when the oppressed class was women, I was fortunate enough to have a strong mother as a role model. It was impossible to believe that women were inferior when your mum was kicking career goals in an intensely competitive field. But as a young queer woman living in Sydney’s conservative Hills District, there weren’t any role models around. I felt isolated, which made it really hard to mute the hate. I found being closeted the hardest part. I also found myself putting distance between myself and my mum, as I anticipated being disowned when she found out.

Coming out wasn’t as dramatic as I expected it to be, but it wasn’t as liberating either. I expected the typical arc to begin with coming out, peaking at acknowledgement, and then eventually sloping towards acceptance or perhaps maybe even denial. Sorry, I should say rejection. What I ended up with was less arc and more slinky. At first there were tears, and then there was curiosity, followed by the silent treatment. Then, out of the blue, the dinner invite.

I thought things were looking up, until it was made painfully clear, by actions like referring to my girlfriend as my friend, that my mum’s idea of coping was denial. At the time, I was just glad not to be disowned, and I began self-editing. I convinced myself that I wasn’t doing this out of fear of being myself, but rather out of respect for my mum. I thought of it as a bargaining chip swapped in gratitude of her tolerating me and my partner in her life. After all, she did invite us both over for dinner.

I had learned in Saudi that the oppressor wants me to be grateful for simply being allowed to exist, and to anticipate punishment and feel shame for demanding more. Once again, this time back in Australia, I found myself oppressed for a part of my identity over which I had no control. Except, it wasn’t forced on me by rhetoric or the Mutawa, instead it was self-imposed in the interest of keeping the peace. Feeling grateful for not being disowned led me to be complicit in my own oppression at home.

When I recognised these familiar feelings of oppression, the rebellious side of me was reignited. I started questioning why a compromise had to be made in the first place. I realised that it was illogical to think the pain felt and the tears shed by my mum were caused by my homosexuality, when really it’s the sense of otherness and oppression that society places on us queers and our families that causes this pain.

I realised then that I was wrong when I sat in front of that VB ad, and concluded that my home was governed by laws that allowed for personal freedoms. The laws in Australia may allow women to drive on the road, and citizens to enjoy an alcoholic beverage, but there is still a cultural doctrine being enforced on us.

In Australia, you’re free as long as your belief system falls in line with that of our politicians, who are quite comfortable legislating for the ostracism and oppression of LGBTIQ Australians. We may have
marriage equality but there is still much to do.

The institutionalised disparity in Australia feeds stigma. It stokes the fears of young queers, and affects how we are seen by our peers and our families. It legitimises hate speech by those who seek to oppress us, just as the laws in Saudi Arabia legitimise men who wish to control women. And as long as discrimination is embedded in our legislature, I cannot consider Australia my safe space.

In a perfect world, we would be governed by scrupulous politicians, but the reality is that we live in a world where standing up for your basic human rights is an act of rebellion. Thank you.