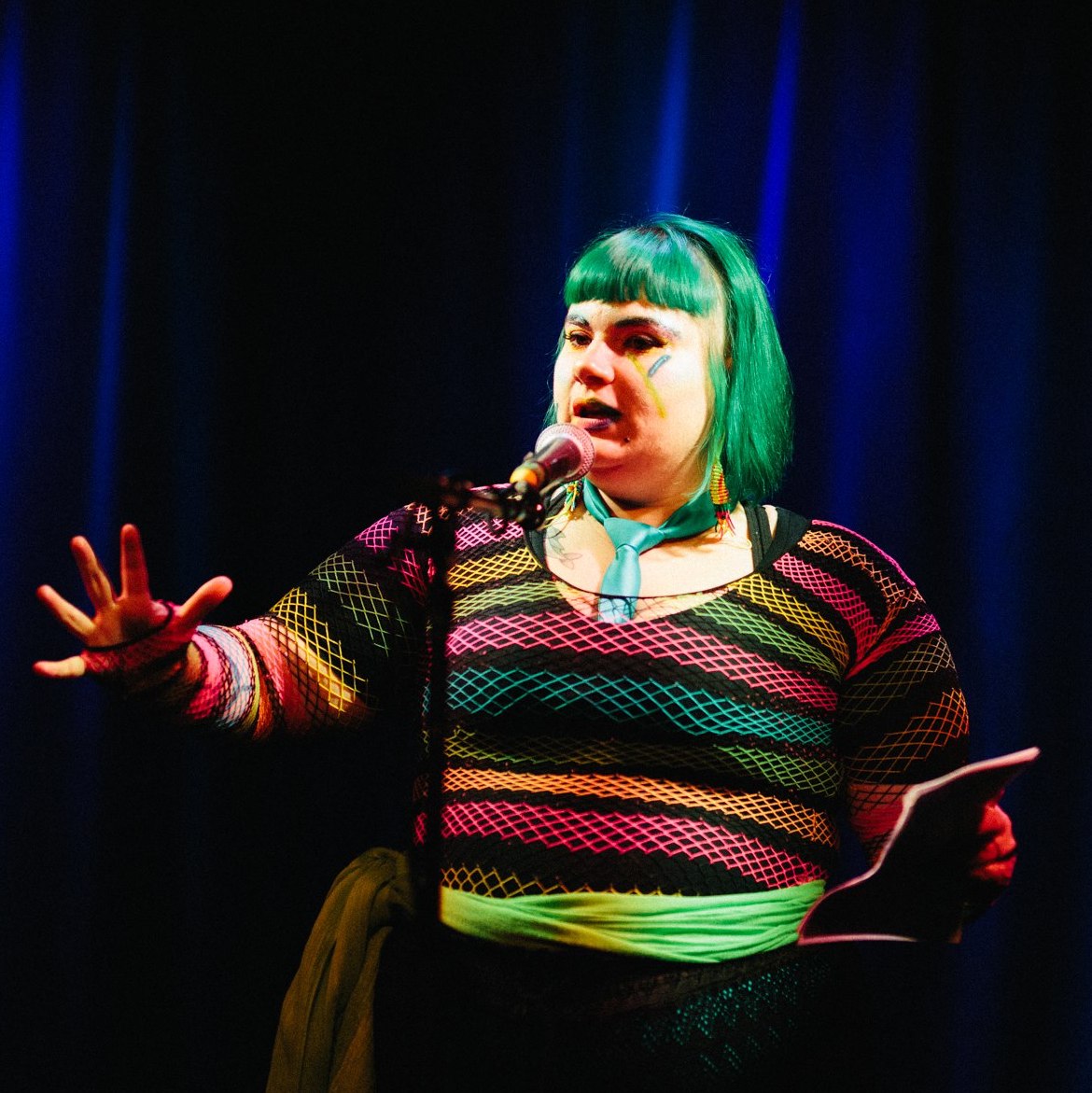 I like to call myself a Gradient Femme. You know, “Oh, look at the hair, the face, the outfit… Oh, God! Don’t look at the shoes!” *Groans in disgust* The ugly black lace-ups housing my orthotics and my lil hoofs. The medical shoes. Gradient Femme. The natural fibres and refusal of heels? Comfort Femme.

When I was nine, I was asked to be the flower girl at my cousin’s wedding. Well, my dad’s cousin’s kid’s wedding, which, in Greek: Cousin. The next morning, my mum told me. “Okay, darling. We both need to lose weight for the wedding. I’m talking starvation diet. Don’t tell your father.” I thought it was a cool grown-up secret. Instead of, “Oh, I wonder how much disordered eating this will lead to in my adult life? Probably a lot.”

The starvation diet idea didn’t take, of course it didn’t. My parents are wog stoners. You know what beats starvation? Bread… with pasta… and potatoes… and more bread, but a different shape.

I was a little fat kid. I grew up in the ‘90s. Ah, the ‘90s. Doogie Howser MD, Foolscap paper. The ‘90s! Back then we had Kate Moss as a door bitch to being pretty. She was the door bitch to the Pretty Club. She is smoking hot, obviously. We all know this. But, you know what? So is a fat chick in a crop top and a mini, rocking thighs that could destroy worlds.

I was the boy in all the school plays. Traditional femininity wasn’t available to me, and not just because Miss Shop and Sportsgirl didn’t carry my size – fuck them – but because as a fat kid I couldn’t be pretty. The closest I could hope for was invisible, which, sadly, is what I was. But the artistic expression that femmeness could provide called to me.

*Imitates professional disclaimer voice* “The role of femmeness tonight is played by a poor impression of Bella Lugosi.”

So I snuck through to femme via the hyper exaggerated, glitter encrusted back door of drag queen and it stuck. I like it. This is what I find beautiful: This aesthetic, this dumpling dipped in rainbow barbed wire, like Zach Galifinakis fucked a pixie. Like a pot plant and Divine had sex on a disco ball and birthed a floor pill.

So I identify as a drag queen. I create my look. This skullfucked-by-a-rainbow look is a form of artistic expression. It’s my joy leaking out of my face. My friends and lovers, they get this. Other people haven’t been as chill. I have a comedian colleague who tells me…

*Imitates feminine Australian voice* “You would look so pretty without makeup. You don’t even need makeup.”

No makeup is great, but so is creating your look every day with paint, and sweat, and fingers. Well, brushes, I’m not a fucking savage. It’s humbling. It gives your aesthetics merit. It wasn’t luck of the genetics’ draw.

*Imitates dominating voice* “You made this happen. It was hewn by your own hands!” – I’m not sure if I’m using hewn right there –  “Hewn!”

I was assigned female at birth but I have a weird mishmash of gender identity and dysphoria. I’m not cisgendered, though, notwithstanding my forever phantom cock syndrome, I’m not trans either, and, wow, do people hate a grey area. They see “femme” and “AFAB” and misread it as “cisgendered” which I get, but it fuckin’ sucks.

Our time is an exciting time. The AFAB drag queen is on the rise, though there’s a backlash. I have actual cisgendered women mates who’ve been told that they’re not allowed to be a drag queen because they’re women. Men telling women that they can’t dress in “women’s clothes” is the manniest thing that ever manned.

Yes. Yes! Into the sea with them or at least into a re-education pit. No one has dared to pull that shit on me yet. People can sense it. I’m a barky little unit. Just…

It’s inevitable though, It’s gonna happen: “You can’t be a drag queen, you’re not a man!” I’m waiting for the day that I have to point out that most cis male drag queens use my day wear as stage wear. Seriously, you show me three drag queens, I’ll show you two pieces I wore on a weekday morning this month, and my driving sunglasses.

“Oh, yeah? You got those frames at a discount party supply store in the outer northern suburbs. The same pair’s in my glove box but in orange. I see you.”

Somewhat unrelated, I’m a toppy little bastard. I used to think that I was a switch in the BDSM sense of the word, until a partner pointed out that, no, I’m never submissive. It’s sometimes I just get greedy, so I’m a rare breed: The femme top. Ooh! When given clear boundaries, good communication and consent, I’m heaps sadistic, which might not make sense to you because I’ve built my whole life around making people happy. It’s my livelihood. I’m a comedian. I love giving people happiness but this is a different manifestation of it. The pleasure of sensation, the elation of catharsis, whatever. So, I love providing joy, especially if that joy is making someone ugly cry from pain. *Growls*

Having said that, my play has a nurturing, caring edge to it. I’m not great with humiliation. Maybe it’s because it feels too much like work. I deal with hecklers in my job. I don’t wanna do that shit at home. I will if you’re heaps into it, but, eh. It’s the same with self-identifying BDSM submissive brats. There’s a place for them. They make so many people very happy, but for me they just seem like hecklers, except now in my fuck time. I don’t want my play time to remind me of shitty gigs I’ve done in Edinburgh at 1 AM. That’s why I don’t fuck bucks’ parties anymore, usually.

You know the guy you call when it’s 4 AM on a Tuesday and you needed, like, custard, and a corkscrew, and a referral to an excellent hand job specialist? I’m that guy. You can rely on me for the hookups. I’m also the guy who tailors everyone’s experiences so it’s a nice, even, good time without the scary bits at those marathon, not-sprint, three-day parties.

Because of this, and so much more shifty hedonistic nonsense, ages ago, some friends started calling me Party Dad, and it was so accurate for so many reasons. I’ve never been paternal, but I’ve often felt paternal to my contemporaries, so when I first heard the term Femme Daddy, it was like a puppy barking it in rainbow lights, just, “Yes! That’s the thing I am! It’s that thing! Yes! That is good! That! Good! Yes!”

“Daddy” – it just works. I’m irredeemably femme but “Mummy” doesn’t feel right. Being called “Daddy” fills me with pride, or a boner, depending on the context.

It’s who I am: Femme Daddy. To me, it’s the best of two worlds, and I just feel so happy to be able to articulate a least a tiny bit of the ever-changing, murky mass of contradictions that is my identity. Thank you.