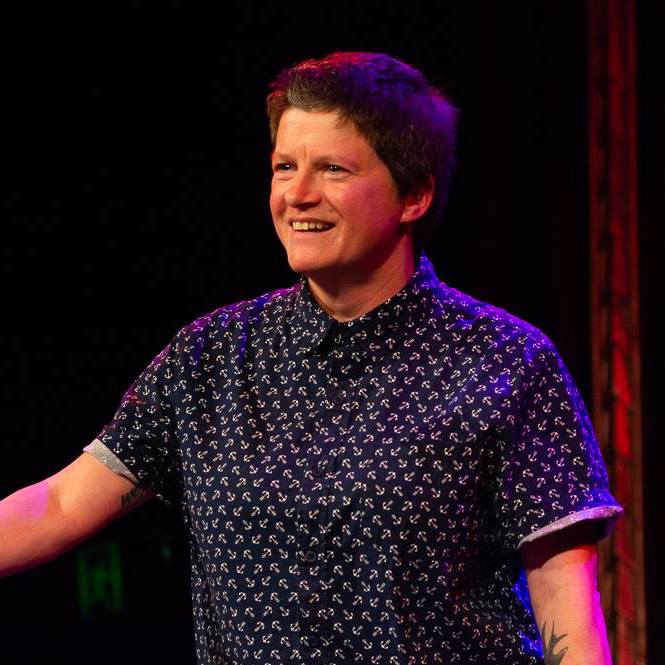 This week – Jen Peden describes herself as a bureaucrat and procrastinator. I’ve known Jen for about eight or nine years now. Unlike the comedians, writers, and academics who often end up on the Queerstories stage, I asked Jen to speak because I know from social settings that she can really hold a crowd. She isn’t  published in the usual places, but she did win a prize for impromptu reading at the Abermain Eisteddfod in Year Five. It’s been downhill ever since.

She’s a committee member for queer soccer club, the Flying Bats FC, falling over on the field for them during games on Sundays and faffing around on their social media during the week. She also recently received an Inner West Council Volunteer Recognition Award. Jen Peden.

Hi, queers and not queers, I guess. Although, if you’re not queer, but here, you should probably get used to it.

My family, to all appearances, is resolutely heterosexual. I grew up in Cessnock in a pub, and went to Catholic school, where incidentally my first week of Year Seven, a nun warned me off being a homo, but that’s a whole other story. Sister did have gaydar.

My parents were devoted to each other and to us, my brother and sister have attractive opposite sex partners, children, houses, dogs, all the trimmings. We grew up playing rugby league, my brother ended up in the NRL, resolutely heterosexual. As kids, we were regularly told two things when we’d get hurt playing, particularly playing sport, and they were “Don’t be a girl” and, “Never let them see that you’re hurt.” Probably not the healthiest messages to give a child. But, it has meant I’ve grown up with a degree of stoicism when it comes to physical injury, a whole heap of emotional repression, and a complicated relationship to gender. I’m fine. No, really, I’m fine.

I’m remarkably good at falling over and injuring myself on the soccer field, on the dance floor, unsuccessfully attempting to flirt with women by showing off and falling over, so very many non-emotional wounds.

Anyway, like I said, a resolutely heterosexual family. And then there’s me. But I had a much older cousin, Brad. Brad lived in Sydney. He was an adult, he was an artist, he was beautiful, and he was gay. He had Polaroids of naked men on his wall. He was everything eight-year-old me ever wished I could be. I mean, I also wanted to play halfback for Manly, but we all have our secret childhood shames.

Or not! No bottom shaming. You know, I can be the Troye Sivan in some scenarios – bops about bottoming. It’s about trust, right?

Then, look, seriously, in the early ‘90s, during the plague years, Brad got sick and died. So even though I’d grown up and moved to Sydney too, I never got to dance with him in a gay bar or to hear his queer stories, so in some ways this is for him.

I’ve always wanted to believe that my personal aesthetic has been heavily influenced by certain types of gay male culture. As a small genderqueer person, I am not so much butch as faggy. If you’ve ever seen me dance or talk to me more than briefly, this would not be news. All those sailors, and nautical tattoos, and Tom of Finland drawings, and bears, and Genet… I love it. George Michael: I love him so much. I’m a terrible, terrible hopeless lesbian.

I get mistakenly cruised and hit on by gay men in dark nightclubs, and I wear it as a badge of honour. A girlfriend once told me that people could see the little cub inside. She said this to me just after a man in Phoenix had felt my face and offered me amyl…

I hope my father never hears this.

Though, this idea that gay men are the formative influence on my queer aesthetic has been challenged recently. I was at the Sydney Writers Festival this year – look at me being all cultured and middle class and white. I was listening to a panel of queer writers talking about being queer readers, and some of the books that had had an impact on them, particularly when they were young. The panel mentioned so many great and much, much loved books. And then Eileen Myles mentioned a book called Scuppers the Sailor Dog. It’s a children’s book about a dog called Scuppers who is a sailor. Scuppers has their own little cabin  on a boat, and they venture off to exotic places. They go to the Middle East, the come back with these amazing little slippers; all sorts of stuff like this.

As they talked about Scuppers, I had this visceral bolt of memory and excitement jolt through my body. I hadn’t thought of Scuppers in probably 40 years since I’d read it. I turned to the friends I was there with, who are here tonight, and way too excitedly told them about this, as I sat there in a navy and white striped t-shirt, with my stupid, stupid nautical tattoos.

And I had to wonder in an extreme and problematic Carrie Bradshaw voice, “If in fact rather than being informed by queer culture, my whole queer aesthetic had been informed by a scruffy, fictional, illustrated dog in a Little Golden Book.”

Probably. Anyway, get that book, read it to your children, encourage their nascent queerness. It can’t hurt.

But back to gay men. I love them! I’ve always been fascinated by facial hair. Any time I’ve gotten to play dress up, I ended up dragging out a moustache. When my primary school friends were going to costume parties as princesses or TV stars, I was going as the archetypal hairy-lipped Australian fast bowler Dennis Lillee…

… complete with red cricket ball stain on my pants. Attention to detail, people, that’s what makes a costume.

Anyway, when I was small, I watched my father shave every day before he went to work, and him going to work meant just going downstairs to the pub. But, anyway, I wanted a haircut like his, I wanted to shave like him, but I wasn’t allowed to. After I had eventually come out, he said to me, “We should have just let you get a haircut like you wanted when you were little. It would have saved a lot of time.” He was right. And now I do have a haircut like his. Yeah.

One day though, when I was still quite little, after he’d finished shaving and headed off to work, I decided to have a go, myself. I stood on my tiptoes to reach the sink and to be able to see, kind of, into the mirror. I lathered up my face with shaving foam and picked up the plastic yellow disposable Bic razor. And then, instead of a smooth, slow, vertical stroke, I made a smooth slow horizontal one.

It turns out my mother was remarkably calm given that one of her children suddenly but quietly appeared in the kitchen, wide-eyed and sporting a beard of blood and shaving foam. She cleaned me up and somehow I didn’t get in trouble, even though I’d done something that managed to be both dangerous and weird for her primary school daughter to do. But then, something amazing happened” To make the bandaid fit on my upper lip, my mum had to trim the bandaid and shape it, and so for a few days at least, I had my own raggedy, lopsided, Elastoplast moustache.

Disappointingly, it didn’t leave a scar. So never let them see that you’re hurt, but learn to use a razor properly. Thank you.