Peter Mitchell: Nunsense in the City of Desires 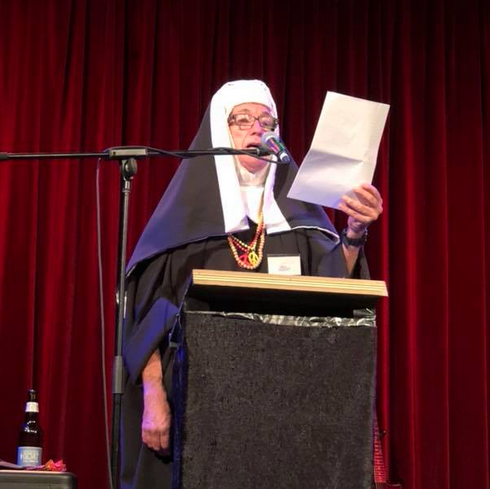 Hi. I’m Maeve Marsden and you’re listening to Queerstories – the podcast for the LGBTQIA storytelling night I host and program in Sydney and Melbourne. This next story was performed as a special Queerstories event featuring ’78ers, those who were involved in the original Sydney Mardi Gras protests in 1978. Next up – Peter Mitchell is an author and poet. He has been awarded numerous awards, fellowships, residencies and grants, including the 2014 Dorothy Hewett Flagship Fellowship for Poetry, and an Australia Council Artists with Disability Grant. But we aren’t really hearing from Peter, not exactly. Instead, enjoy the amusing antics of Sister Mary Sit-On-My-Face.

Evening, Congregation of the Faithful. Tonight, the piece I’m reading describes my adventures with the San Fransico Sisters in the 1983 Gay and Lesbian Freedom March. Nunsense in the City of Desires.

A whistle blew, its sharp noise reverberating around the throngs and the low-slung buildings.  It was the Mistress of Novices calling the nuns to order. We gathered in organised chaos: uneven lines, a contingent of primary colours.  The Radical Fairies were more rag-tag than the sisters, their libertarian diversity resplendent in their drag and politics. On both sides of Market Street, thousands of people crowded the footpaths, two and three rows deep.  Same-sex couples, families of the rainbow hue, many hetero people clapped, whooped and waved streamers and rainbow flags under a wide dome of sky.  People hung out apartment windows or on the verandahs of hotels and guest houses. The edges of roofs on some buildings were also dotted with sitting people, their legs swinging in time to the pumping music. After walking a short distance, three motorcyclists riding 650 and 750 cc bikes swung in behind the sisters.  By the facial expressions on some of the nuns, they had obviously practised our, “No More Guilt” motto, lustful glints shining their eyes.

My lust zeroed in on the biker with a cute, round arse, fall-in-love-with-me eyes and wearing brown leather chaps and vest. “Morning,” I said, my throat dry from nervous anticipation. “Hiya.  How you doing?” His deep voice filled me with excitement. “Do you mind if I sit on the back of your bike?” “By all means.'” His eyes scanned the brevity of my summer habit.

I slung my bag over my right shoulder, its thin, leather strap a striking contrast to my bare skin.  Clutching the scapula, I swung my legs over the seat, the leather warm from the gentle summer heat. “Let’s go, Sister!” He revved the throttle and I held onto his waist as the bike roared forward.  He half-turned and shouted, “What’s your sisterly name?” “Sister Mary Sit-On-My-Face.”

He half-turned again, his eye-brows rising like question marks. “Would you like to sit on my face?” I crooned into his left ear. He stopped the bike as the other sisters and bikers had stopped too.  His left-hand drifted onto my leg and squeezed it firmly. We resumed our snail’s pace.  Many revellers laughed and clapped at the incongruity of a leather-clad biker pillioning a nun.

“I’m Mike,” he said, stopping the bike again.  I smiled and drowned in the deep wells of his brown eyes, then decided the incongruity needed playing with. “Don’t freak out with what I’m about to do.” He nodded, concentrating on the pedestrians and other bikes around us, the continual start-and-stop lurching the bike every couple of seconds. I moved back on the pillion seat a smidgen and lifted my left leg, then my right over Mike’s shoulders.

“Whoa!” He said, turning his head, “What the fuck?” “Keep riding.” I got the balance right and held onto the edges of the seat with my hands.  Mike took it in his stride and maintained the bike’s momentum as its movement enhanced my balance.  A great number of the crowd were delighted, cameras flashing as it wasn’t every day a nun threw his legs into the air.

“That wasn’t too bad,” I said, putting my legs back on the foot pedals. Mike turned around and smiled. “And that’s not the end of it.” A slight frown creased his forehead. A minute later, I repeated the action.  Oh, I thought, if only the sisters in Sydney could see me now!  “Fuck!” I shouted as my head was pulled backwards. “What the fuck’s happened?” Stop the bike!”  I glanced left.  “My scapula’s caught in the back wheel.” “Shit,’ said Mike, shifting into neutral gear.  He placed both feet on the road and balanced the bike.

I invoked the spirit of the dingo and managed to get both feet on the ground.

The scapula twisting around as I did so. “Are you okay?” “I think so,” I said, my voice quavering.  I bent down and looked at the material wrapped several times around one of the spokes.  Questions crossed my mind. Do I disentangle the material? Or rip it? I decided acting quickly was priority number one.  “I think I’ll have to rip it.” A frown crossed Mike’s forehead again. “Untangling it will take too long,” I said, pointing to the twisted material.  I ripped it away. Here I was in the middle of Market Street, I thought, the ragged end of the scapula fluttering in the air, words caught in my throat. “That’s a real shame,” said Mike. I shrugged my shoulders and shoved aesthetic considerations about what I looked like as a nun to the back of my mind.  I hopped back on and we resumed our way. At the next stop, I said, “Do you think I should do it again?”He squeezed my left thigh.

For a third time, I threw my legs over his shoulders.  Mike grabbed my left leg, his tongue gliding down the calf.

The bike moved again.  “Hey Sister,” someone shouted from the crowd, “had any bad habits lately?” “As many as I can imagine,” I shouted back.  My back relaxed, the leg muscles lengthening as I became comfortable with the motion again.  I wrapped my legs around Mike’s neck much to the crowd’s frantic applause.

Mike stopped the bike and, for a second time, we disentangled the scapula from around the spokes. “Maybe it’s better if you stay off the bike.” “Oh,” I said, my disappointment palpable. “Sorry, Sister.” I knew he was right.  I was more disappointed at the probability of not getting pissed or stoned with him through the afternoon.  For the remainder of the parade, I walked with the other sisters, weaving from one side of the street to the other and the back, waving, smiling, posing for photographs.

The parade finished at the Civic Centre Plaza, a large park-like area in front of San Francisco City Hall.  There were hundreds of stalls of political and social groups, AIDS organisations and all manner of things gay and lesbian in the middle of the downtown area. At the sister’s stall, a small number of hard-working nuns enticed men and women into a photograph with the sisters.  The enticee paid two dollars, stood between myself and another nun as we posed in irreverent or erotic ways. The camera button clicked, the lightbulb flashed and a memento for life was given to many appreciative individuals.

One hot, young man walked past the stall, his eyes enthralled with our antics. The third time he strolled past in his form-fitting 501s, bare-chiselled chest and tee-shirt hanging from the back pocket, several of us looked knowingly at each other. “I bet he walks past again,” I said to my other hard-working compatriot, Sister Mona Minute. “If he does, we’ll grab him.” Sister Salvation Armee’ worked the crowd, older Anglo gay male couples, young Latino dykes, young men in their twenties with KS lesions tattooing their faces, all falling to our irreligious allure.

Sister Mona Minute nudged me gently in the ribs. Mr Bare Chest, as we dubbed him, ambled past again. Sister Salvation boldly stepped towards him and grabbed his upper left arm.  “Ooooh,” he crooned, “such strong muscles. Would you like to pose with some of our blessed sisters?” Mr Bare Chest smiled sheepishly, his green eyes shining.  For five seconds, he hesitated, the calligraphy of his body language writing indecision. “Think of it as a memento for life,” encouraged Sister Mary S.

He paid two dollars and stood in front of the white, cardboard backdrop.  I stood on his left, Sister Mona Minute to his right, the tips of our tongues tickling his nipples.

After ten seconds, they were erect. We looked at each other, our eyes widening in surprise. What was going through this young man’s imagination? I glanced down at his groin. A bulge appeared in his jeans.

“I need a break,” I said after two hours of continuous work. “And a well deserved one,” said Sister Salvation. I returned to the sister’s stall.  We worked through the rest of the afternoon, raising money for the sisters’ future manifestations as well as donations to HIV organisations. By five o’clock, the crowds thinned, the sun sinking behind the surrounding buildings, the shadows lengthening. I walked around the area one last time, the intuition coming to mind that this was probably a once-in-a-lifetime experience, that I probably wouldn’t travel overseas for many years.

The end-of-a-busy day feel wrapped itself around the moment: People packing up their stalls, the PA system being dismantled on the stage, babies asleep in prams. Food wrappers and flyers littered the ground. The San Francisco nuns thanked me for my hard work and commitment to universal joy. I managed a lift with a complete stranger, a man who knew one of the other nuns.  I was staying in a spare room in an old Victorian terrace in McAlister Street in the Haight-Ashbery.  He dropped me across the street from the house and I scurried upstairs.

I unlocked the front door, I walked up the wooden stairs.  Don, a friend was in his first-floor room. I hadn’t seen him earlier in the day. He smiled as I strolled in. We recounted our respective adventures through the day. I went to my room, undressed and hung my habit on a hanger. Lying down on the foam mattress, I looked at it with affection, remembered the moment of parading along the footpath, our habits flowing in the gentle breeze then lingered about what might have happened with Mike, his fall-in-love-with-me brown eyes a keepsake. Thank you.