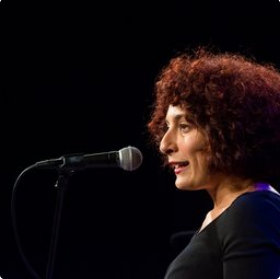 Hi. I’m Maeve Marsden and you’re listening to Queerstories – the podcast for the LGBTQIA storytelling night I host and program in Sydney and Melbourne. This week – Kelly Azizi is a writer whose field of interest includes the politics of ethnocultural identity, the diaspora, and non-white feminism. In 2016, she completed her Master of Cultural Studies degree at the University of Sydney. Kelly plays an active role in Sydney’s art community and is an advocate for its cultural diversity and inclusiveness. She was the Gallery Administrator at 55 Sydenham Road – an independent art space in Marrickville.

After all, I’m politically aware, I’m engaged with queer culture, and it’s not like I haven’t thought deeply about my own sexuality, yet at some point I went from, “I’m queer and I’m here,” which was bolstered by other markers of identity that helped me feel empowered and visible, like “Lebanese-Arab” or “Woman of Colour”  to just plain old “shit.” At some point, I found myself craving actual invisibility within a community that kept pointing their finger at me and screaming how my markers of identity are in fact a source of disempowerment and invisibility. I was told that I must always speak up, speak up and defend my politics, even when that other, less glamorous yet far more pervasive marker of identity – my working-class identity – meant I needed to work just to keep my head above water in a city ruled by property developers and soaring rent prices.

So here I am feeling shit, overworked and tired. Too tired to speak up, at least all the time, in a community that’s come to expect a particular response from its diverse constituents. And that’s when I realised my story isn’t even a story about how I’m a shit queer. It’s actually a story about how communities themselves can be shit, and how that shitness will lead communities to inevitable fracture.

There’s one particular incident that occurred in Sydney’s queer community several years ago now, back in the days when Facebook reigned supreme over Instagram, and when the primary purpose of a Facebook status update was to herald marvellous philosophical and political insights on all things queer, and of course to smite down those who  oppose one’s alleged progressive thinking. So the incident I speak of involved a queer performance after which the performer was faced with severe criticism over whether their performance was actually racist. The details of this deate are irrelevant. Suffice to say, a massive Facebook blowout ensued and two parties emerged: The Anti-Cultural Appropriation Party and the Freedom of Artistic Expression Party. I call this event The Great Scism because, really, things were never the same afterwards. Certain players in the online debate suffered social death, or at least fatigue, and disappeared into hiding. I stayed out of the debate, though I watched it unfurl with dismay, not because I was attached to either party’s argument; I felt they were both flawed. It was the sheer reductionism of the arguments being thrown about, centred upon ethnocultural identity, which is a topic very close to me, all for the sake of satisfying personal vendettas, for satisfying personal vendettas, for satisfying one sense of self-righteousness. It was a battle of egos, a clash of ideology at its most ludicrous.

My personal tipping point was when a group of people who I’d considered friends attempted to rope me into the debate. I was the only non-white queer amongst them, and they spoke with the assumption that I would agree with their arguments. They paid no heed to my silence, which I’d hoped would say a lot during that period of heated outspokenness. I eventually told the most vocal among them to leave me alone. I asked them if I was a shit person of colour, “A shit queer,” for not agreeing with their views. They understood my point, they quickly apologised,  then we disappeared from one another’s life. I’ve never seen or heard from them since. Community, hey?

For some, it affords amazing support, a familial support, but in my case, too much community is a stranglehold. Since that whole debacle, I’ve never been able to regard community – any kind of community – as an emotional safety net, as a source of empowerment or as a reliable guide to morality and ethics. In fact, I loathe using that term, “Queer family.” I don’t have a queer family, I have good friends because I already have a family, a big family. And as much as I love them, they’re a pain in the arse. I suspect I picked up my impatience with family from my mother, Laudy.

My mother was always the black sheep in her extended family, a sassy lady who antagonised conventional ideas of what it meant to be a good Lebanese wife and mother. Laudy was also the first in the family to file for a divorce. I’m not even kidding when I say she was divorcing her in-laws just as much as she was divorcing her husband. While I wouldn’t go so far as to say I’ve divorced my community, there’s no doubt in my mind that my mother has instilled in me a desire to break the grain, which is ironic given that queerness is about breaking the grain of heteronormativity, so if I’m breaking the grain of the grain, then what’s left for me? The remnants of a collapsed ideology.

I recall another incident, where an online news source published an article showcasing Sydney’s best queer venues and events. I shared this article on social media, scoffing at the idea that queer identity could be reduced to a list of places where we can all consume culture by spending money. I may have offended a few people who were involved in the article. They perceived my critique as a personal attack. It wasn’t meant to be: I just think it’s important to contemplate philosophically on what it means to be queer, what it means when a supposedly alternative culture becomes accessible to the masses because I worry that queerness has become more ideological, more marketable than ever been before. This frightens me because it’s precisely this kind of ideology that silences those who need to be heard the most. It’s this kind of marketability that allows opportunists to profit from this way of life. A cultural politic.

Should I feel sad or disappointed that the philosophy of queerness was never as stable as its strongest advocates have made it out to be? Not really. Queer thinking was born from the tradition of thinking philosophically about our gendered, sexualised, racialised bodies. And it’s in these moments of destabilisation where communities fracture, where personal philosophies disintegrate, and disillusionment ensues that my body and mind feels the freest. It’s moments of ideological collapse where I can determine my own ways of seeing the world, of seeing my sexuality and ethnicity within that world. With one foot in the community, and with one foot out of the community, I’m happier being a shit queer if it means claiming the right to think critically about my own existence.