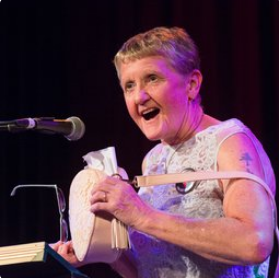 Hi. I’m Maeve Marsden and you’re listening to Queerstories – the podcast for the LGBTQIA storytelling night I host and program in Sydney and Melbourne. This next story was performed as a special Queerstories event featuring ’78ers, those involved in the original Sydney Mardi Gras protests in 1978. Kate Rowe has worked in medical administration and is a fitness and health fanatic, who went to her first Gay Games as a cyclist in New York in 1994. She went on to participate as an athlete, a volunteer, and board member for 20 years. She is still is a triathlete hoping to qualify or the World Triathlon Championships in September. Performing this story, Kate wore a pretty accurate replica of the dress and heels she refers to in the piece, adding quite the dose of physical comedy to the tale. Kate Rowe.

My little ditty is called Same-Sex Marriage ’90s Style. Once upon a time in the dark ages in 1997, actually, life was different for gays and lesbians.  I know this is hard to believe in this time of enlightenment when we have smartphones, online shopping and Netflix, and all sorts of other gadgets. In those days, if you were employed by the state, the superannuation schemes were discriminatory. So, if you died your little nest egg could only go to a wife or husband as in heterosexual or a de facto, also heterosexual, relationship. If there was none, the money went to the state.

Yes, it’s true. It’s true. These days, well, since January, every celebrant, dressmaker, decorator, wine store is apoplectic with glee as we queue up to get married. Instead of the state taking our money, we’re spending shit loads on weddings.

So, this is a little story of how Ray and I – he gay and me a lesbian – were married as heterosexuals and why.  And this is true.

Ray and I met when I moved as a mature aged student – I was doing a film degree, as you did in the late ’80s – into a two-room box in Leichhardt.  It was an old house divided into three flatettes and he lived next to me. We immediately hit it off, and though we both knew we were gay and lesbian, it took a while to acknowledge this to each other, because back then one had to be a bit more circumspect about coming out because of possible repercussions. And the closeted and internalized homophobia was almost the norm. He had a dog and I had, at that point, only two cats.

Because I’m a lesbian.

KATE: Anyway, they broke the distance between us, as animals really do. Ray was a practising alcoholic and I-

This is true. And I was a sober one in a 12-step program. I think I was about 12-years sober then, something like that. I was trying to make a new life for myself.  He would go out at night and come home paralytic. I would find him on my veranda and help him get into bed. He wouldn’t remember anything the next day.  It’s called having a blackout.

He would also take his dog for a walk to the beat, the local beat.

It was always, “I’m going for a walk.” I would always say to him that whatever he did, it was his business but to be safe. This was in the days when HIV treatments were still hit and miss and our friends were still dying of AIDS en masse, but if in a blackout, he would never remember if he had been safe.

After I graduated, I got a contract, albeit only for 12 months, at SBS, so I made the Big Time. I made enough money to move to a better place and I didn’t see Ray for six months, though we kept in contact. Then one day he called me and he asked if he could come and visit. I was shocked at what I saw: A very thin man with yellow skin.  He had been told he had cirrhosis of the liver and would be dead in weeks if he didn’t stop drinking. He did stop drinking, however, his cirrhosis didn’t get any better. He decided to retire from work with ill health.  He said he was fucked if he was going to let the state get his Super, and so he asked me to marry him so I would get the money if he died.

We went out to dinner to discuss our engagement.

And it was then he told he was also HIV+. I was shocked he was asking me, as I was not his closest friend. He had heterosexual girls who were his friends. I thought he would’ve chosen his best friend. It didn’t make sense to me. It doesn’t make sense to me now. Having lived in poverty on and off most of my life, this was going to change me, so I was happy to enter into this farce. We knew we would have to perform this marriage and act straight, so the fun was about to begin.

Off we trooped down to Haymarket to the registry office,  him in a suit, me in a dress… something like this.

We all signed the papers and had our marriage guidance counselling, they give it to you. We bullshitted our way through it, and how good were we. We got lots of guidance about the deep meaning of marriage, and how commitment should work, and it was patronising. Given we were both in our 40s, you would’ve thought that they would’ve at least given us an adult chat, but what was funnier was that the counsellor assumed that we were straight and that we understood heterosexuality. This was so far from the truth of how gays and lesbians actually relate to each other.

It was at this point that I could see the difference between being straight and gay by those that are in this room that know what I usually look like. Anyway, to be treated as straight was so different to the experience of being treated in the past as a lesbian, and especially around ’78. Wedding Day came along.  I had two friends come along as witnesses.  We went shopping looking for a nice dress. I had a girly haircut and they did my makeup because I’m fucking hopeless. I was and still am not a lipstick lesbian, so being made up was at 45 was a new experience.

And so we made our vows, we exchanged our op shop rings, and we had to kiss. I don’t have a photo of that unfortunately but, oh, my.

That was weird because this had to be an Oscar-winning performance. We kissed whilst stifling the urge to crack up and laugh. Then we all went off to our reception at the local restaurant, and we just couldn’t stop laughing at how absurd the whole thing was. I actually thought about making a short film, but I never did. After three months and with a shared address and banking account where his pension was paid into, and to which I swore I wouldn’t touch, and I didn’t, Ray decided to move back to Harvey Bay, which is where he was from. I hardly heard from him, until a phone call to say he was very sick and needed help.  I contacted the local AIDS organisation in Brisbane and arranged to help the hospital.

Over the next 12 months, he got worse and developed AIDS dementia.  He wrote me a letter saying that I had caused his AIDS, that he had fallen in love with his straight counsellor, and wanted a divorce.  I, of course, said that it was his money and he could do what he wanted, and that after the legal 12 months of marriage I would sign the divorce papers.

The 12 months came and went, and I didn’t hear anything until I got a call from his social worker on a Friday night, midnight, to tell me he’d had a seizure and was dying.  I promised him that if this ever happened I would be there for him. I flew up the next day and spent the weekend with him. It was one of the most challenging and confronting two days of my life.  To see Ray in agony – and he was in agony – curled up like a baby, blind and skeletal. I spoke to him as he could still hear me – apparently, he could still hear me – and I thanked him for the gift that I was just about to receive because it would change my life. I flew back to Sydney on the Sunday night, and at 3 AM on the Monday morning I got the call that he had died.  I flew up the following week for the funeral, and his few friends were there with his dear dog, but what was really sad was that his parents rejected him when he came out and they refused to attend.

I asked his social worker at the wake why the divorce papers never arrived.  He told me that when Ray received my letter stating it was his prerogative what he chose to do, it was his money, he decided to leave the money to me because I decided to let go rather than fight, which is what he expected. Ray’s kind act enabled me at 47 to buy my own little unit, which I now don’t have because I had to downsize and all of that, which up until then was going to stay a fantasy. I was able to be financially secure for the first time in my life.

In the ’80s and ’90s when the AIDS crisis was at its worst and we were all losing our friends every week, I reflect on how, in a perverse way, it brought gays and lesbians together in a more caring and loving way, as we stood up to the shared discrimination together rather than separately. We came together on our similarities rather than fighting about our differences. Some of those differences are still there, and apparent, but I do feel we approach these in a more conciliatory… or at least I would hope we do.

I still wear Ray’s wedding ring and my wedding ring. It’s just to remind me to be grateful for what I now have as a result of his generosity. Thank you.