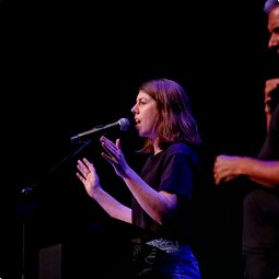 Hi. I’m Maeve Marsden and you’re listening to Queerstories – the podcast for the LGBTQIA storytelling night I host and program in Sydney and Melbourne. Next up – Alex is a Melbourne based stand-up comedian and is currently achieving her life-long dream of being brave enough to live outside her home state of Queensland. Despite her departure from the Sunshine State, she performed this piece at Brisbane Comedy Festival. When not performing stand-up, Alex writes for Network 10’s The Project, and can be heard on Triple J, ABC, and Joy.FM.

ALEX: All right. Since this is my return to Brisbane, I thought I would respect my family and I wrote a story about them. Every year my Mum, Stepdad, brothers and I go on a family holiday in Yamba. Yamba is a small fishing town and one of the-

ALEX: Yamba fan in the house. Nah, that’s just my mum. Anyway, it’s one of the few coastal areas that doesn’t get overly busy, even during the peak season.  I truly believe my parents like Yamba because they don’t have to fight for my brother’s or my attention there, as there is literally no one else there.

Last week, I told my mum I was writing a piece for the Queerstories and she said, “You’re not going to mention Yamba, are you?” She goes, “You’ll wreck the low rental prices.”

I said, “No… But also most people will listen online, Mum, to the podcast,” and I said, “And they’re not going to be near Yamba.” She said, “Well, some of them may be in Sydney, and from there it’s only a seven-hour drive.”

When I arrived at the accommodation, my mum said I could take any room I want. I took the one furthest from the rest, an unsuccessful first attempt to spend time with the family. It was a few hours into the day when I asked Mum when my brothers would be arriving. She said, “Oh, I thought you knew, they’re not coming.” She goes, “They couldn’t get the same time off as you. They’re going to be here after you go.” She goes, “Worked out for the best, really, because now we have you all to ourselves.” She goes, “Heheh.” I was like, “Heh-heh.”

I get along with my parents but the idea of being alone with them in a small fishing town for almost two weeks was a little overwhelming. I tried to remain calm and went to hyperventilate on the balcony. While outside, I noticed there was an awning but it was retracted. It appeared to be electrically operated, and I found this switch inside the door, right? So, I clicked the switch but nothing happened. 0.06 seconds later,  my mum popped her head out of the kitchen. She goes, “It’s broken.” I said, “I reckon there is a remote for it somewhere.”

Having heard the word “remote” my stepdad’s Dad Instincts went into overdrive, and he came out of his bedroom and said, “Doubt it.” I said, “Surely.” My stepdad went, “Alex, we tried the switch.” I said, “But that seems like a main On Button, I feel like there’s a remote somewhere.” And Mum said, “We’ve been here a week longer than you, Alex. There’s no remote. The awning is broken. You just got here. We’ve been trying it. We’ve been here way longer than you. Stop messing everything up. You’re moving everything around. Stop trying. It’s broken.”

I said, “Alright. I still reckon it works.”

Mum: “We bought you beers, how many do you want in the fridge?” I said, “Five… ” because you can’t say six.  So began the task that would keep me sane for the next two weeks: The search for the remote.

Every time they left the house I would be looking for that remote. Unfortunately, there is nowhere to really go in Yamba so they rarely left the house, and we spent most of our time just sitting in the lounge talking. On day three, we ran out of conversation. That didn’t mean we stopped talking, that just meant that we stopped talking about me, and particularly my childhood. Something that came up was that I wasn’t very fond of my stepdad when I was growing up. He was a great guy, but I was 10-years-old, and I didn’t really see how he fit into my life. And something I would do to challenge them on their relationship – my mum and my stepdad – is I would ask my mum difficult questions, especially when she’d come to tuck me in at night. She’d walk into the room to say goodnight, and I’d be there under the covers. I’d just say, “Hey, Mum, before you go, who would you save if the house caught on fire, me or Jerry?”

My stepdad.  But to my mum’s credit, she always just said me. But when we were in Yamba and we were talking about this, my stepdad was sitting on the couch and he sort of perked up. He says to my mum, “You said you’d never pick.”

My first thought was, “I guess she told him about this,” but then I also thought, “Did he used to do this to her as well?” Like, would she walk into their bedroom and he’d just be sitting under the blankets just like, “Hey, Liz, if I set the house on fire, who would you save?”

You know, I feel bad for Jerry looking back now because he was a bachelor with no children, and then six months after meeting my mum, he lived with three kids under 13. That is insane to me. I remember overhearing Mum on the phone once and she said, “I feel this will really mature him.” She was talking to a friend. She said, “I feel he will really rise to the occasion.”

But I think Jerry and I did bond. I think we bonded over the fact that neither he and I cared that my two brothers would have perished in that house fire.

One day I decided I wanted to call him Dad. He’d become a father figure, and I was like, “Maybe he’s too afraid to ask and he wants it.” I was like, “We’ve both matured a lot. It’s time.” I got all amped up and I walked into the kitchen and I said, “You know what, Dad? I’ll do the washing up tonight.” But then he just ran to his bedroom, slammed the door and said, “You’re not my real daughter!”

On day six, I noticed Mum’s bedside table drawers were jammed. Before I could investigate further, Mum entered the room, white wine in hand, and she announced, “You know, I always thought I could be gay if I wasn’t into men.” Thanks for your bravery, Mother. So brave of you to say. She’d then just shut her eyes and just stood there. I was like, oh, God. She’s probably thinking, “Yeah, yeah. I would’ve met a beautiful lesbian if it wasn’t for all of those pesky men getting in the way with their strong arms and their broad shoulders and… broad… balls.” It’s what women want, right? I don’t know.

I don’t think she tried very hard to be a lesbian. For example, her keys aren’t even on a carabiner. Why are lesbians always trying to give the impression they’ve just abseiled into the building? You know what I mean? I think they’re just trying to say, “If you need me to go down, I can do it quickly and safely.”

Day nine, Mum: “You know, Alex, the worst part about menopause is the loss of libido. Well? What do you have to say about that?” I just looked across at my stepdad at the dinner table, and I said, “Sorry, man.”

Day twelve, the best day of the trip, the day I was waiting for Jerry and Mum to get home, sitting under the outstretched awning, remote in hand. I found the remote and it was jammed in that bedside table behind the drawers, and I sat there so smugly just revelling in the moment. I thought, “Take that, you lovely, generous but wrong parents who paid for my trip here.”

When they arrived home, they both stood open-mouthed for about a minute, and then Jerry said, “Was it you or your Mother who said there’d be a remote?”