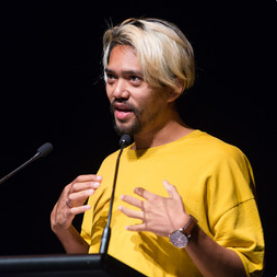 Hi. I’m Maeve Marsden and you’re listening to Queerstories – the podcast for the LGBTQIA storytelling night I host and programme in Sydney and Melbourne. Next up – Vonne Patiag. Vonne is an award-winning writer and director working in theatre and film. I really love this story, which explores both creative and sexual identities, and the hard but important work of discovering your own voice. Vonne performed at the Western Sydney Queerstories at Riverside Theatre that I hosted as part of Sydney Mardi Gras.

Most filmmakers have a turning point, a project that seems to strike the right mix of authentic storytelling and technical artistry, when most Directors will say, “I’ve found my voice.” For so long, I was expecting that to happen, moving from job to job, city to city, project after project, country to country, waiting for the heavens to open. It took a near-death experience involving a pineapple and some shaman voodoo to help me finally mine, and, boy, did my voice have a lot to say.

In 2016, I made a short film called Window, set in Western Sydney, but at the time I was not living here. I had lived in the Inner West for just under six years, then travelled the world for a year. And, still feeling a strange creative and emotional emptiness inside, I did what all bored Sydneysiders do, and moved to Melbourne.

I loved the change of pace. I mostly sat in cafes and wrote, or read books, or hung out with new theatre friends, but mostly I liked the chance to restart my life. Like Sailor Moon, I was a soldier of love, but romance had never come to me easily, and I wanted to find out why. On a whim, I applied for a filmmaking grant and got commissioned to make Window, with one stipulation: Nothing could change from the pitch. I had randomly listed the film’s setting as Western Sydney, and the film festival that had green-lit the film had said they loved it. I was on Centrelink, I mean, unemployed, and somehow I had to figure out how to make a film in another state with little to no money. I started calling in favour after favour, and after a while, it seemed possible. I would write, direct and star in the film, following my very 2016 dream of becoming the Filipino Lena Dunham.

Yes! I flew to Sydney for meetings and became a bi-coastal artist. And, yes, I’m aware Sydney and Melbourne are on the same coast, but it sounds really cool in an Instagram bio.

I remember in particular the first meeting I had with J, an actor friend of mine that I had wanted for the role opposite me. We spoke openly about masculinity, male intimacy and friendship, and I relayed a story to him that I hadn’t realized until then was important. In the year prior, 2015, I had found myself in New Orleans on Bourbon St at 3 A.M. and drunkenly stumbled into a voodoo house. I paid $30 for a reading with a voodoo priest and had the most intense experience. It was like instant therapy. All my fears evaporated like mist. I found myself sweating, but I wasn’t hot. I walked the six Ks back to the hostel and stared at my naked body for hours in the mirror. I told J this story, not understanding the connection yet, but I had written the bathroom scene into the film, so I thought I was just giving it context. I was not hinting at sexuality, and it was a relief when J understood the film was personal.

The film, Window, is about an intimate connection between two male neighbours, examining physicality and male emotional intimacy that culminates in a kiss in a sports car. We did that kissing scene over and over again from different angles, every angle, and we licked lips almost fifty times. My lips were bleeding by the end of it. But, notice, I didn’t label the film. For me, acting in and eventually seeing the kiss between two men was never gay or queer, and that wasn’t denial stopping me. I fought heavily to capture a tone of emotional intimacy between two males that wasn’t sexually charged, and I honed in on the most nuanced parts of the production to make sure every element supported this vision. I even appeared naked in the film and made every effort to not appear sexy… which is hard.

Just a tangent: I remember my DP saying, “Vonne, you need to spread your legs a bit further to get more light in the butt cheeks.” I was like, “Not sexy.”

I kept telling people it was a film about a man discovering he was human, that he was alive, and that the film examined the process of looking at another body to understand your own; an act prevalent in males, but steeped with societal shame. I wanted to shine a light on these in-between moments that I felt were so important. In-between: That was exactly how I felt.
When I would watch Window through the editing process, I felt like I was watching myself figure something out. I had tried each letter, and thought maybe that was what the character in Window was trying to find. Maybe that’s what I was trying to find.

A few weeks later, I found myself on a short trip with my best friend, T, to North America for a wild reason involving Instagram, Donald Trump, and the FBI, but it’s a completely different story, which I will come back for. We drove from New York to Montreal, excited to be in one of the LGBT capitals of the world. I had an announcement to make to T, and at Le Cartet, a café we’ll never forget the name of, I proudly and wrongfully stated that I was pansexual. Now, we weren’t sure if I knew exactly what that meant but Miley Cyrus had just done it, so…

I remember saying I wasn’t exactly straight, but not exactly gay, somewhere in-between. Bisexual was the obvious choice, but even that didn’t feel right. I had to write press articles for Window at the time, and was careful to, again, avoid all discussion of sexuality.

While we were in Montreal, it started snowing, and overnight it turned from a warm Spring day into a blizzard. T and I were travel-addled, the way moving too fast through too many timezones can destroy ruin your mind and destroy your sanity, so every time we left the safety of the car, I would pretend to be a teenage girl on George St on Friday night, who was wearing not enough clothes. Travel-addled. I would beg for my boyfriend’s jacket. I wanted chocolate, so we parked and crossed the snowy market square, and I immediately started playing up.

“Tyson, give me your jacket.” They were always North Shore names, by the way. Tyson, Paul, et cetera.

As we entered the supermarket, and I kept pretending to shiver, a man yelled, “Yeah, you better tell your girlfriend to shake with fear, fucking faggots.” And we were stunned. The man then followed us, telling T that he was going to “Gut his wife.” And he grabbed a pineapple and told me he would beat us with it. We tried to walk by quietly, and we ended up in the chocolate aisle. It was me deciding between peanut or plain M&Ms while this man was just here yelling in my face with his pineapple. “Peanut? Hmm. I don’t know.”

Eventually, another guy ran down the aisle, grabbed his friend, and was screaming, “It’s not worth it, man. You’re too high,” and dragged him out. A nice security guard who saw the whole thing explained a lot of youth cross the border from New York to party because of the younger legal limit, and he apologised to us. We left without chocolate. I share that incident because it stunned me, but also spurred me to keep searching. I couldn’t settle for being nothing.

A few days later, I had to fly from Montreal to Melbourne – no mean feat, they are very far – straight to Window’s premiere at St Kilda where we won Best Film. I was exhausted but ecstatic. The film was eventually seen by more people, shared to more audiences, and that nuanced kiss between two men was claimed by different people as meaning different things, but that was okay because I started to understand myself, and eventually I figured out an answer. I wanted an answer and I was ready for it, so I Googled.

I sat down one night, read up about all the different forms of sexuality. I was no longer afraid of queer culture. Voodoo priests and pineapples had taken all that fear. I eventually found a label that fit so perfectly: Demi-sexual. Under the banner of Asexual, but not quite. It’s hard to define, but it’s sometimes called half-sexuality or in-between. You can google it. It’s hard to explain. Window finally made sense to me. My creative self knew, I just had to catch up with it. It was me on screen, crafting my own in-between world. The voice I found was my own telling me what I’d known all along – that I was human and that I was alive. And, looking at my own body on screen, I finally started to understand my own. It was a window into me.