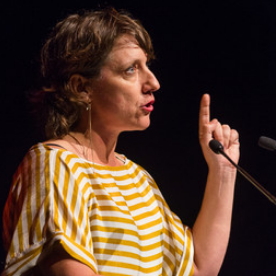 Hi. I’m Maeve Marsden and you’re listening to Queerstories – the podcast for the LGBTQIA storytelling night I host and programme in Sydney and Melbourne.  Next up – theatre maker Karen Therese who performed at the Western Sydney Queerstories at Riverside Theatre that I hosted as part of Sydney Mardi Gras. Karen is the artistic director of award-winning company, PYT Fairfield. This piece titled Sleeplessness will be performed as a full-length solo work at Riverside Theatre in September 2018 as part of the National Theatre of Parramatta’s program.

I’m so happy to be here talking to a Western Sydney audience.

Right? I’m Karen Therese or Kaz as almost everyone who knows me calls me. I grew up in Housing Commission in Bidwill, Mount Druitt, so that makes me pretty Western Sydney, and being a Mount Druitt girl apparently makes me pretty tough. Unfortunately, I grew up without a history, so up until I was about 27 I couldn’t tell any stories about myself. But tonight, I’m going to try and tell you my story, even though I don’t really know it. But, over the last 15 years, I’ve done some investigations, I’ve found out a little bit, so here we go.

When I was a kid in the early ’80s, I was sitting in the lounge room with my family – my mum, my brother and my sister – watching 60 Minutes. Now, 60 Minutes was hard-core journalism at the time, and this woman reporter came on the TV and said…

And I looked closer at the telly, and I got really excited, and I yelled, “Mum! Mum! We’re on the telly!” The reporter was just down the road.

The way mum, Eva, came to be living in a place like Bidwill as a single mother of three kids, of which I’m the youngest, was that at the age of nine, my mother grew up in the care of the Australian Government. She got some very special attention in an orphanage run by nuns of the Catholic Church. She called it The Home. She told us some stories about it, like, how she hated pumpkin and she wouldn’t eat it, and the nuns would just grab her, hold her down, and stuff it down her throat. Bless.

I found out my mum is a migrant. She said she was from a place called Budapest, Hungary, which I imagined was someplace like the Wizard of Oz; somewhere definitely better than Bidwill. She came to Australia when she was six, escaping the war; that’s the Second World War. Hungary in World War Two was brutalised by the Nazis, and then straight after, the Red Army came in and they were so much worse.

In The Home the nuns told my mother, her mother was dead. No memories, no stories, no history, no past, no family photos, no family members, no grandparents, no stories of grandparents. Not knowing, not remembering. Growing up, it was just us and Bidwill.

Actually, there was this one photo. In our house in Bidwill in the lounge room, we had a wall unit, you know, where you put all your special things like your wine glasses and dinners sets, you know, the special things for special occasions, the stuff you never use. And on this wall unit was a photo of a woman, a passport photo of a woman’s face. She was beautiful. Every time I asked my mum who she was, my mum would say, “Oh, that’s my mum.”

My mum’s mum, my grandmother. I never knew her. Her name was Lenke Palffy. And when I asked my mum, “Well, what was she like?” My mum would always say, “Oh, I don’t remember, love.”

I grew up not knowing who I was or where I came from until 1999 when my sister went back to Sydney to try to find out who we were. She encouraged my mother to try and remember. My mother finally said, “Parramatta Mental Hospital.” And they went there and they found documents, which led them to the Department of Immigration. My sister Melanie and my mother Eva travelled all over Sydney and discovered a series of documents that gave us, for the first time ever, a story of a life that we never knew… A fragmented picture of a life that we never knew, an extraordinary life. All the clues to knowing my grandmother, I found in these documents. Since then I’ve spent the last 15 years travelling around the world trying to piece together our story.

The documents my sister found said, “A man named Lenki Palffy died on the 23rd of January 1984, and was buried in Emu Plains Cemetery with two other destitute people.” Under the law, destitute people are people who are found not to have families. We lived in Mount Druitt a half-an-hour drive from Emu Plains. In 1984, I was 12 years old. But the funeral was brief and anonymous; a state burial.

“Cushing’s syndrome is a disease in which a woman’s pituitary gland…” which is here “.. produces too many male hormones. The body becomes obese and hairy, and a woman can grow a full facial beard. In severe cases, a woman’s clitoris can swell and resemble a small penis. Early sufferers of this disease would be labelled “The Bearded Lady” and they would be found in old fashion freak shows or carnivals.

My doctor also told me that Cushings Syndrome has been attributed to being pumped with too many old school drugs; the type they use to use in mental institutions. My grandmother spent the last 10 years of her life in The Crest Nursing Home in Annandale where she must have been so isolated and alone that even her gender had been forgotten by the staff at the home. As a result, Lenke Palffy died a destitute person. Her family, her culture, and her gender had been completely erased.

In 1999 when I found all this out, I’m a 27-year-old a postgraduate student at the Victoria College of the Arts or the VCA. Don’t ask me how I got there. I’ve never done an undergrad, and I never opened my HSC results. In fact, I still have the envelope somewhere, and it’s still unopened.

And I did a show about my grandmother. Those documents became my grad work at VCA. It was called Sleeplessness. It was about being haunted by my own history, a history of not knowing. Growing up, I always had a sense of a horrific shadow, a darkness hanging over our family, and as I went on this search, I understand now why my mum chose to forget, and why I can’t sleep.

My Mum is a survivor and an activist. In the last 15 years, she has been part of the fight for her Human Rights. This fight has evolved into the Federal Government’s Apology to the Forgotten Australians in 2008, and then five years ago, ignited the Royal Commission into Child Abuse in Australian Institutional Care. You might have read about it today. She joined an organisation called CLAN, or the Care Leavers Australia Network, who were supporting my mother and were instrumental in making the Royal Commission happen. Now, they’re part of the family. I became an artist. I tell stories.

And the rest of the story, as I understand, goes like this:

I found out that Lenke Palffy when she arrived in Australia in 1951, she got housed in a Migrant Hut in Bankstown. She wasn’t coping. She wasn’t coping because she was living in a domestic violent relationship. One day, the documents said, “She was suffering from severe bruising and abrasions.” My grandmother went to the police for help, and because she was migrant women who couldn’t speak English, the police put her in Parramatta Mental Hospital. At the time, there was no women’s refuges. Because of this, my mother, Eva, at the age of nine, was put into an orphanage or The Home. And that’s when she was told her mother was dead.

My mother was married in 1970, and seven years later divorced because my father was abusive. Interestingly, I found out that when my sister went on the search to discover our family truth, she was in a profoundly violent relationship.

I thought that being gay, I was safe. That being gay meant that this would not happen to me, that I would not follow this pattern, that somehow I would avoid the fate of the women in my family.

My sister became ill not long after she found these documents, and has never recovered. Around that time, as a 35-year-old woman, I found out that being gay didn’t protect me, and for the first time I found myself trapped in a same-sex domestic violent relationship. And, I’ve never told anyone this before, but I was the spokesperson for same-sex domestic violence for the Inner City Legal Centre and spoke several times to the media about my experience under the pseudonym of Jade, which is even more gay than Kaz.

So, now, as my religious leader, RuPaul says…

“It’s not about how many times you fall, it’s about how many times you keep getting up. I’m now getting to know my history and my story, and I realised that knowing your history and your story is really helpful in breaking cycles, in moving forward, and trying to create new patterns for the future, and I’m doing my best. And, as you know, I’m a Mount Druitt girl, so apparently, that makes me pretty tough. So, I’m okay, and on a good day, I am pretty tough.