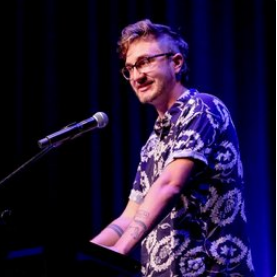 Transcript:
Hi. I’m Maeve Marsden and you’re listening to Queerstories – the podcast for the LGBTQIA storytelling night I host and program in Sydney and Melbourne. This week – Ben McLeay is a writer Pedestrian.tv and co-host of political comedy podcast Boonta Vista Socialist Club. He does roughly 10,000 tweets a day @Thomas_Violence so you can all follow him, and would do just about anything for a free lunch, including performing at Queerstories. This story will be published in the Queerstories book, due for release in September 2018.

Uh, gay hello to everybody.

Because I am not smart enough to imagine bad things happening to me, last year I decided to drive 25,000km across America, alone, in a piece-of-shit van that I bought off a stranger for $2000. It went pretty well. I had a lot of what I would politely refer to as “stomach problems” thanks to an ongoing disagreement with high fructose syrup. I nearly had a car accident because two drunk hitchhikers had a fight in my car, but, with both of these, my lack of imagination proved to be accurate: If anything, the diarrhea made me look a little more svelte.

One experience did shake me, though: Crossing the border into Canada. Here, I would like to check my privilege. I’m a white dude from a western country, so when I say that I had a bad experience, I don’t mean that I was indefinitely detained, or deported, or separated from my family, I mean that someone was rude to me.

Now, not having any itinerary to speak of, I figured I might as well dip a finger or two into Canada, driving over the border just north of Seattle. This left me in something of a pickle. Washington is one of the rare, majestic American states with legal weed, and I had bought a lot of it. I spent the days prior trying to balance how good I was at hiding things in a van, versus the terrible consequences of being caught, versus how much money I had spent on the weed. Again, I had spent a lot. This might sound like something that only an idiot would consider and I can only say, “Yes.”

Ultimately, I managed to look beyond my insane lust for drugs and I made the correct decision. I pulled off before the border and threw it all in a bin outside a supermarket. This turned out to be a very prudent decision, as, would you believe it, if you are a dishevelled young foreigner in a windowless van that is registered under a name that is not yours, you’re not going to be waved through with a smile. I was directed to pull out of the queue by a lady that I bafflingly thanked profusely because I am the softest man alive.

It was very weird. He instantly began trying to trick me into admitting that I was a criminal. Because I am a genius, I decided to immediately tell him an easily disprovable lie. I told Hot Sean Spicer, unconvincingly, that I hadn’t been doing any paid work while over here, and when he told me that it’s actually legal to do so and there’s no reason for me to lie, I was so incensed at the quite accurate accusation that I was lying, that I lied again, insisting that I hadn’t.

Put off by my initial attempt at subterfuge, when asked if I had had any weed while in the marijuana-friendly state of Washington, I decided to be honest. I told him, “Yes, very much so. In fact, I had a whole bunch with me until I binned it 20 minutes ago.” This did not please the man.

“What if a bunch of bin-diving children found my stash of THC-infused gummies,” he asked? And, true, that would be a terrible thing to have on my conscience. The thought of a bunch of teens getting stuck on the couch watching YouTube videos of how rubber bands are made for hours at a time shakes me to my very core. I offered to him that I did not know what else I was supposed to have done with them. He suggested I should have flushed them down the toilet. I countered that I don’t think you’re meant to flush rubbish in the toilet. Like a debate between two evenly-matched intellectual giants, we were at an impasse.

Hot Sean Spicer proceeded to try and convince me that I was high. As a very impressionable person, this very almost worked. “Why are you so nervous? Why are your eyes so red?” For a second, I thought he was right, despite knowing full well I hadn’t gotten high in a week. “I’m nervous because this is terrifying,” I told him. “And my eyes are red because my entire body is very sensitive.” Unconvinced, he informed me that I got high so that I wouldn’t appear nervous when traversing the border, which seems instantly disprovable given that I was visibly nervous as shit.

Seemingly satisfied, he moved on, asking for my keys and my phone. Casually, with the air of someone asking if the weather is nice, he asked for my passcode. I felt it then, a stirring to become one of those libertarians who film videos of themselves yelling at cops that they know their rights. But I also felt another thing, namely, the desire not to get thrown into a lightless cell for 48 hours. Rightfully feeling like a complete dipshit, I told him. “It’s 420-666.”

As we both silently acknowledged that I am not a genius, I was told to sit down and wait. Which I did, passing the time by coming to the realisation that the last thing I posted on Facebook was a piece I had written, which I had posted with a caption that explicitly stated that I was paid by my job to do it while overseas, about things I had been doing overseas.

For nearly half an hour, I was left staring at the wall with the terrified eyes of someone viewing a distant mushroom cloud, furiously attempting to concoct a further web of lies with which I could mitigate the flimsy web I had already constructed. I was saved from this nightmare of hypotheticals by further probing about my drug history which I, again, decided to respond to honestly. I was gently surprised to discover that you will not appear less suspicious if you tell them the amount of drugs you have done is “heaps.”

After having every reflective surface on my person swabbed for cocaine and heroin, I was directed once more to sit down and be terrorised by my own thoughts. After marinating in panic for a while, I was summoned back to the counter. “OK, now we are suspicious,” the hot man said. Briefly, I experienced a moment of confused delight at the realisation that they had not been previously. “Why do you have suitcases full of VHS tapes in your van?” Honestly, it was a great question. I could not reasonably explain to you now why I collect VHS tapes, and I’ve had months to think about it, so you can imagine that my on-the-spot explanation to someone who had the power to ruin my life was not entirely convincing. Again, I was told to sit down and mull over all the dickhead decisions I have ever made in my life which lead me to this point.

Then, abruptly, they let me go. I was furious. I wasn’t angry at the rudeness or the lack of explanation or apology. I was angry that, later, I thought of heaps of good burns I could have made at the guy that I didn’t think of at the time. So, instead, as a form of revenge, I did this. Thank you very much.