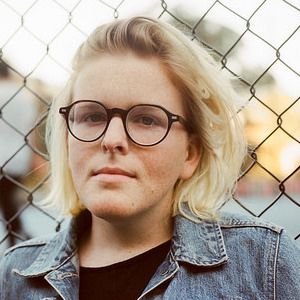 Hi. I’m Maeve Marsden and you’re listening to Queerstories – the podcast for the monthly LGBTQIA storytelling night I host and programme. This week’s story was recorded at a special edition of Queerstories at Volume 2017 Another Art Book Fair at Sydney’s Artspace. Next up – writer and musician Allison Gallagher.

Hello. My name is Allison. As you may be able to tell from my haircut and dress sense, and general unease, I’m an L-word.

That’s right, I’m a Libra. I’ve been a Libra as long as I can remember. I feel like when I was comfortable enough in my identity to come out as a Libra, that’s really when I started to feel things making sense. That, and also when I realized that I was an enormous lesbian. Those are the two for sure.

I’m also a trans woman, but what that’s looked like has changed pretty significantly in the three years or so since I came out. When I was growing up, “That’s not for boys,” is a phrase I heard with quite a lot of regularity. I was assigned male at birth, and so obviously expressing interest in things that were coded as for girls resulted in a lot of shame, and a lot of stigma. It was made extremely clear to me that I was a boy from the moment I was conscious. When I began puberty, I felt this really intense discomfort and dysphoria about what my body was doing.

Up until that point, I’d kind of just assumed that I would be vaguely boyish for the rest of my life, so having my body change so drastically was completely disorienting. I was also attending a Catholic all-boys high school at the time where that toxic teenage masculinity is really inescapable. I would pass my sister’s school on the way to my school and feel these real pangs of jealousy that rather than growing up and having other girls as friends, I was stuck in this dystopian nightmare were my friends and I mostly bonded over who could punch each other in the arm hardest.

I left high school, and at the tail end of my tertiary education, I was severely depressed. I Googled “Transgender woman” and would spend hours watching these transition videos of awkward, uncomfortable boys becoming these really beautiful, powerful women. And, so, these trans women claiming their rightful womanhood in a world that had denied them access over, and, over, and over was really inspiring to me, and inspiring enough that I realized I wanted to change my name, and I wanted to start taking hormones, and transition, and identify as a woman.

The thing is because the only real visible representations of trans women I’d seen in the media or online were conventionally feminine and were into men, I felt quite a lot of trepidation. I didn’t want to be male but I did like a lot of the parts of myself that were masculine, and I was also into women. There was this running joke before I came out as trans among friends, which is that I was a lesbian trapped in a man’s body.

I began seeing a psych’ who really confirmed a lot of my fears. Asked if I saw myself wearing a dress, high heels, and asked if I was into men, and asked if I desired breasts, I think is the term, and so it was pretty fucked up. It wasn’t until I began seeing a different psych’ who had a better idea of what fluidity looked like that I felt comfortable enough talking to anyone about what gender looked like for me.

When I first began to take hormones, my body began to change in ways that felt really natural and felt really right. All the parts of my shape that had felt so constrictive and rigid began to change. Every morning, I’d wake up carrying a body that felt a little closer to how I imagined myself when I looked in the mirror. But, what didn’t feel natural or right, however, was this really internalized assumption that I had that in order to exist in this kind of way I had to align myself with femininity in a way that didn’t really feel comfortable. I felt that to be a trans woman was to be a trans femme and that there was little or no space in between.

Without having access to an IRL community of trans people, I found myself on online message boards that were pretty intensely geared towards people trying to look as feminine as possible. It was this kind of community where trans women would post these selfies, saying, “I’ve been taking hormones for six months,” or whatever, and other women, mostly wealthy and White, and heterosexual; would leave comments with handy hints for how to pass more effectively. I really couldn’t relate at all to that, but I didn’t think that I had a choice. Those were the options that were presented to me, and that’s what I thought I had to be like.

Over the first year or two of my transition, people would bend over backwards to tell me how pretty I looked in a floral dress, but would never comment on how good I looked in a button-up shirt and black trousers. I objectively look good in pretty much everything, so I realized that it couldn’t have been a purely aesthetic issue. I sort of began to think about how much society’s already extremely little acceptance of trans women was kind of dependent on our willingness to enact a very specific kind of femininity, and enact these gendered expectations in a way that didn’t really leave space to exist outside of those margins.

2017, over two years since I came out as a trans woman, has really been the first time that the way I carry myself throughout the world has felt in any way reflective of how I conceptualize my gendered expression. Rather than viewing masculinity as something that I have to avoid, at all consequences, I began to understand how empowering it is to take the gendered norms that you’ve kind of had forced upon you as a young person, and reconceptualize, and reclaim and subvert them in ways that are active and autonomous choices, in so much as they ever can be; for those of us who are fans of Judith Butler.

This story isn’t really about regret or de-transitioning, or anything else that someone like Lyle Shelton would cling to in order to scaremonger about, like, the dangerous risks of radical gender theory. I still identify as a woman, and I still take hormones, and I still cringe when I hear my old name or see it in a piece of mail, or something. That isn’t really the story. The story is more about how swapping one binary for another can still result in feeling totally boxed in.

A coworker once, who really went out of their way to preface that they, like, “Totally respect my decisions,” and think I’m very brave for what I do, asked what the point of transitioning was if I was actively trying to make myself look masculine. That totally misses the point, and my relationship with masculinity has effectively changed from one that was imposed on me to one that I have some level of agency over. It’s mine, I own it, and I own it whenever I make choices before I step out of the door. I choose to wear men’s business shirts that make me look like I’m on my way to a meeting about synergy.

I spent 21-odd years being told by the world, in no uncertain terms, the ways that I could and could not present myself, as I navigated my way through it, it, in that sense, makes very little sense to me then that now that my body reflects the way I conceptualize my gender that I would continue to let other people or internalized ideas about what it is to be a trans woman dictate how I dress, or act, or look. That’s all. Thank you so much.