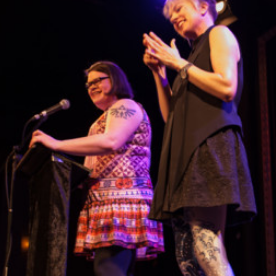 Thank you. So, you know how workplace discrimination is a bad thing? Like, it’s a bad thing to assess someone’s ability to do a job on the basis of race, gender, sexuality, gender identity, height, weight, hair colour, eye colour, or by how much the individual resembles Jack Black.

That’s the case across most fields of human endeavour, except for acting, which I’ve discovered over the years is that most of the time, when it comes to acting, no-one really cares how well you can act so long as you fit the brief. Before I evolved into the transgender glamazon you see today…

My dress is themed after Theseus and the Minotaur.

I used to fit a very different casting brief; a very popular casting brief. Namely, “Portly, hairy gentleman with expressive face.” I would be sent endless casting calls for, “Man who loves beer,” “Computer hacker,” “Man who doesn’t take care of himself very well,” “Fat best friend,” “Man who loves food,” or “Autistic man.” So it came as little surprise when, in 2012, I was asked to audition for a television movie called Underground – The Julian Assange Story, as a character named Trax, Julian Assange’s fat, autistic, lazy, computer hacker best friend.

Suffice to say, I auditioned and got the role; of course, I did. I nailed the shit out of that audition, by which I mean I was exactly what they were looking for. On the day we did our makeup and wardrobe tests, I saw many of my co-stars walk out with their beards trimmed or their hair bleached. But when it came to me, the director just said, “Don’t touch Jordan. Jordan’s perfect. In fact, Jordan, have you been to Wardrobe? Are those your clothes? They are? Great. Wear those in the film.”

They didn’t care that I explained that the tee shirt was an acronym. So, I got to be in a television movie. We turned the thing around in four weeks. I made a whole bunch of friends and even performed one scene inside a garbage bin. I had to cry in another, which was considerably harder, on account of my being an emotional brick wall. In the end, they had to use what is called a “tear blower” on me. It’s a kind of menthol pipe. Essentially, it’s a packet of lifesavers opened at both ends. The makeup artist uses it to blow menthol directly into your eyes, causing them to generate tears, not unlike mace.

I got better. A few months later, a friend posted a link to the Logies website, pointing out that Seal – you know, Kiss From A Rose Seal, was a nominee for Best Newcomer thanks to his role on The Voice. How preposterous. I clicked the link and confirmed that, yes, Seal, Kiss From A Rose Seal, was one of Australian television’s best newcomers. But then I stumbled across something equally ridiculous: The list of potential nominees for Most Outstanding Performance. There were hundreds of headshots on that page. Literally, the only thing you needed to do in order to be eligible for Most Outstanding Performance was to be in a thing on the television. I scrolled further down the page and, sure enough, there was my pretty little face. However, unlike most of my fellow nominees, they hadn’t used one of my glamorous, agent-sourced headshots. Oh, no. They’d decided to use a screenshot of me from Underground. Namely, the shot of me inside the garbage bin. So, I figured if being in a bin is good enough for an Oscar then it’s good enough for a Logie. That was a Sesame Street pun and it was fucking dynamite.

Upon realising that the Logies’ Most Outstanding Performance category is decided by popular vote, I decided to give it a crack. For shits and giggles, I thought I’d do a little stunt, a funny joke; run an internet campaign and try and win a goddamn Logie. I knew I didn’t have the advantages of other candidates had, such as beauty, fame, a consistent Australian TV profile, or even a particularly outstanding performance. If I was going to win this thing I’d need to make a pact with the dark powers of The Internet, so I made an appeal to the real-life overweight, autistic, computer hackers of the Web: The Traxes of 4Chan, Reddit & Something Awful.com.

“Dear Internet,
I wish to win a Logie Award. If you vote for me, I will let you compose my acceptance speech. You may make suggestions for the speech and I will cobble it together from those suggestions. The initial response was muted. A few semi-professional trolls jumped on board, lodged votes, and sent through suggestions for my speech. I was mostly just asked to thank particular people, such as Limp Bizkit’s Fred Durst, and a presumably real person called Weedlord Boner Hitler.”

I should say at this point that I was very careful about how I canvassed votes. I specifically did not ask people to hack the Logies website, no, or subvert the rules of the competition, or submit fake votes using an automated script that would couple names and postal address from the White Pages with randomly generated, yet valid email addresses. Sure, some of the more resourceful people on these sites may have probably definitely started doing that of their own accord, but the important thing to remember is that I didn’t request it myself.

After a few weeks, it became clear that my idea hadn’t quite reached the critical mass required to move beyond the Something Awful forums and out onto the internet at large. I was ready to put it to bed when I got a call from someone at the Herald Sun, that bastion of journalistic excellence, who wanted to do an interview with me about my Logie nomination campaign. I had a really friendly chat with Mr Herald Sun. We talked about the ridiculousness of the Logies, my silly campaign. and the importance of social media in promoting artists. It was a pretty innocuous interview. He laughed a lot and said that he thought the whole campaign was quite funny. I didn’t think too much of it. Then, the article came out. The headline read, “Actor’s bid to mock the Logies vote,” and it didn’t get better from there.

I felt betrayed. I’d had what I thought was a lovely conversation with Mr Herald Sun, and then he went and wrote a lot of awful things about me. My campaign had been waged in the spirit of Aussie larrikinism, but this article made me out to be some sort of unpatriotic demon who wanted to ruin television as if it wasn’t already a fucking dead medium.

More and more articles followed until one morning I was awoken at 6:30 by a phone call from a private number.

“Hello, this is So-and-So from Channel Seven’s Today Tonight.”
“Oh, hello.”
“Is this Jordan?”
“Yes.”
“Hi, Jordan. We got your number from your grandparents.”

“They were the only Raskopouloses in the phone book.”

Basically, the people at Today Tonight had rung my 80-year-old Greek grandparents at 6 A.M.to hunt down the phone number of their grandchild, the Logie-hating cunt. I didn’t want to do the interview, but if I didn’t they’d probably spring me as I was was walking to my car like they do everyone else who has the good sense not to talk to them. So, I did what any sane person would do: I put on a giant fur collar, nerdy glasses and a silly voice, and acted like a dickhead for the better part of an hour. Whenever the camera was off, I played the part of a reasonable human being, but the moment that red light was on, I was in full character. At the end, the Today Tonight man shook my hand, shrugged his shoulders in an expression of defeat, and gave me a Cab charge for my trip home. I caught the train.

You can still see the story online. I felt like they tried to bait me into giving them something for the story they wanted to tell: “Bitter piece of shit and terrible actor tries to ruin everything for everyone.” But in the end, were forced to run the story, “Funny person tells jokes.” But, thanks to all the free publicity, my campaign returned from the dead, bigger and brighter than ever. It had gone from fringe internet joke to classic Aussie underdog story. Votes came cascading in, along with new and exciting suggestions for my increasingly inevitable victory speech.

Here is the speech in it is full glory, although I should preface that I was instructed to wear a Hello Kitty badge pinned to my lapel, to wear a fake mole attached to my face, and to ensure that I had worked up an oily sweat.

“I can’t believe I’m really here. Six months ago, I was just a humble girl writing in her dream journal. Now, as I hold this terrible, ugly award, I tell you that I am the man who does not sacrifice his love or his values, and if you wish to know why you are perishing…”

“..you who dread knowledge – I am the man who will now tell you.” *Growls* “My dear Bagginses and Boffins, Tooks and Brandybucks, Grubbs, Chubbs, Hornblowers, Bolgers, Bracegirdles and Proudfoots…”

“I’m here because of the goons, the goons who gave their lives in the Auraxian War, goons who liked and voted for me because I truly am something awful. I would also like to thank the individuals and organizations that made this award possible: Bloodfart McCoy. Weedlord Boner Hitler, Bane Jeffries from Victoria, Trophy the Cat, the Fred Durst Center for the Humanities and Arts, the Congressional Tea Party, Angela Lansbury, the Island of Guernsey, all the hosts of Gardening Australia including Peter Cundall and Costa, Riz’s dogs, Cosmo & Sagan. I hope Cosmo gets his butt under control. Deborah Rhodes for her unused research that is capable of finding three times as many breast tumours as the currently used standard. Each one of them is a brain, an athlete, a basket case, a princess, or a criminal, and, of course, my parents who have always… ” *Barks* My hovercraft is full of eels but I just want everyone to remember that the space robots are here to protect us from the terrible secret of space. If we only ask each other one question: “Do you have stairs in your house?”

“You follow drugs, you get drug addicts and drug dealers. But you start to follow the money, and you don’t know where the fuck it’s gonna take you. I feel that words cannot express my joy, and I can really only express myself through interpretative dance.”

I was then instructed to do the dance from Napoleon Dynamite, slip a ring onto my finger, and then slink offstage as if invisible.

But I never got to read the speech.

On the day after the voting closed, TV Week announced that they were going to audit all the votes. Well, less all the votes and more all of my votes. My voters received an email requiring them to confirm their selection, and while that probably got rid of my illegitimate votes, it probably also knocked out a fair whack of the legit ones too. It was a shambles. Never conduct a vote by electronic mail…. Or regular mail.

So, I didn’t win a Logie. I didn’t even get nominated. Hell, I didn’t even get invited to the ceremony, which is a shame because last time I went to the Logies, I did cocaine… with a certain Neighbours star who shall remain… Toadfish Rebekki.