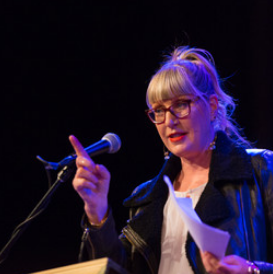 Hi. I’m Maeve Marsden and you’re listening to Queerstories – the podcast for the monthly LGBTQIA storytelling night I run at Giant Dwarf in Redfern, with support from the City of Sydney. This week – journalist Heather Grace Jones.

I’m going to read three very, very small pieces. The first one is called In the Family Way, and it’s about unconditional affection.

I have a mother

And I have luck

The kind of luck that they sell magic lamps for, the
shamrock, the jinn, the wishbone drying over the fuel
stove; the I should be so… kind of luck that
slams off walls and forgives sins. I have a family beyond
the sadness that runs in my veins and the speakeasy of
my childhood

I have women who have rung me day after day to make
sure I did not kill myself
Women who have let me shelter in their homes for years,
for more than once
Women who have given me cash money no questions
asked no receipts required
Women who have sat with me, fed me, listened to me,
mocked me, pushed me off my soapbox, told me it wasn’t
my fault and when it was,
judged me
held my heart in their hands pushing it open and shut,
held my hair when I vomited, told me to shut up or did
not
rolled their eyes, dotted their I’s, minded my kid
minded me

Women whose hair I have never brushed because we are
not in soft focus
We are not low lighting, slow motion, fast motion, memes
We are not on the rebooted L Word or Girls season five or
Broad city or even Game of Thrones
We are catching the train
Some of us weeping
We are raising hellfire, dancing in circles, in chaos,
through madness
We are stepping though the tear in the universe
The bones of the patriarchy, the homophobes, the Islamaphobes,
the trolls who speak to kill

This is a love song. I sing it to the poets, the gardeners. the geeks, the grandmothers, the cooks, the schemers, the bushwalking, hiking, kayaking, biking, dyking, dog walking do-gooding, lawyers and activists and yogis and shrinks. And all the way too smart, way too stubborn mish mash riff raff jetsam of my life

We who sit at the tops of cities and talk about how to
keep the world at bay, how to feed the babies whose
tongues are ulcerating from hunger in Yemen, in Eritrea,
in Chad in Syria bombing down, what to cook for dinner,
how to raise sons who smash and daughters who grab
and know that mindfulness is a scam with benefits and
bitcoin a possible solution
we scrape our thin skins against the grain, kick back, push
back buckle under, bound by water thicker than blood
We talk about love, about those we love, men women, trans,
cis, ecu-fucking-menical

We who talk about what to wear. what to read, when to dance, when
to dance, when to stand, stand when to woke, how to render
beautiful the daily tasks of living, why there’s no line of
hands from here to Nauru, to Manus a human bridge
and no refugees in my lounge room, why Dondale is still
open, why rape is still an option, Charlottesville and what
the fuck will happen if there is no new season of Ru Paul

What is it to get up day by day stuck at bus stops, in
traffic, on phones in waiting rooms, running through this
desperate hard bitter town as wild and free as ponies
we are forest bathing
we are biting the hands that feed us
feeding ourselves
swimming in the graveyard of tears holding each other
above the tideline, the complicated
way too complicated
it’s more complicated than that difficulty of being a person
who is flawed and scared and brave and waxed lyrical all
at once because if there’s one thing I know it’s that the
corporations and the guns and the postal-fucking-surveys
and the lies and all the
military
mining
medical
beauty mythical
celebrity
security
state sanctioned
domestic terrorist
industrial
hateness
cannot, does not, will not, stop us changing the world
this is a love song
and I’m singing it for you

I did want to tell this story about my kid because right now he’s in Jubilee Park drinking, as far as I know.

He told me this story about how a girl in his year came to him and she said, “I’m a lesbian. Does that mean that I now have to wear flannies?”

HEATHER: Yes! Yes, you’re right! And he said, “Okay, well, I think we need to talk about butch and femme, and gender non-conformity.”

So, it’s okay he’s drinking soda water in Jubilee Park, I feel, you know, like… The point is, he is really lucky because he’s never really had to face any homophobia but that is really not true, and in this moment when we are marginalised, and those of us who don’t want to be assimilated are extra marginalised, I think we need to celebrate.

And so, this next piece, it’s called Incandescence, and I wrote it a very long time ago. You probably need to know that I spend quite a lot of time in Kabul, and in Kabul there is a lot of winter, but there’s not a lot of lesbians.

Well, there might be. I personally didn’t meet them. Okay.

Everyone is downstairs in the great hall
Chairs crowded together
The smell of unwashed bodies and the whisper of power
International Women’s Day in the city of the war
Nothing to see but speeches and the men who make them
It’s snowing;
Out the window the flakes fall full and muddy
I’m bored
Stuck
Running between the needs of dignitaries and the string of emails that hang ropy on my screen
The words she’s sent and the things we haven’t said
Thinking of her
Willing her

Meet me she texts
Later I say, so cool, so smiley face, so adult
I return to crowd control but she’s burned me
Crept up like the first time we kissed, the view from her window, the singular pleasure of riding her cock so swollen I don’t care if she is big or small,

The Minister speaks of women’s rights and the men, as they do every year, ask
Why no Men’s day?
Headscarves are handed out and promises are made
The President sends his apologies and a Deputy Vice official thanks the mothers and the teachers and the gender appropriate
The room empties
I go upstairs tripping as I cross the icy courtyard
People loom
Phones ring
Violence apparently not sorted after all
The snow is falling
Falling
Falling
Falling
The desks list against the glass, the heater smokes but does not warm
The seam of day unravels into night

Come quickly I message as I desk-brush my hair, teeth, nails, apply Almost lipstick black honey, Nars the Multiple, Mac Ruby Woo, close the drawers, open the drawers, powder under my arms, change my knickers, slam the computer down, put on the kettle, make tea, glance at the door, eat biscuits, read book, remake tea, glance at the door, ponder the politics of giving and the likelihood of going home

She’s still handsome
Eyes that singe
Cheekbones that slice the sky
We do not talk
Her fingers mountain big as they travel down my spine
The desk hard against my arse
The door open
Her hand is up my dress, up my cunt, around my throat
She twists, scraping hot coals and broken glass
Better she is than sex
than sleep
than deep sea diving

The snow is
Falling
Falling
Falling
I am Weeping
My feet catch on fraying carpet.
I bite
I kick
I scratch her eyes
In another world, another time before the bullet and the grave, the child and the haunting, her condescension would have rolled off me like the slow rocking of the train to Milsons Point
Not now
Not when the girls are sold and the boys are taken
Not when the mountains echo and nothing nothing ever lasts

She grabs my hair
Meet me she says
And I am on my knees, angry pulling down her jeans, my mouth as hard as it can be, pushing her back, fingers twined, screaming into her like a bad rock song.
Then it’s over
We walk downstairs towards the armed car and the Turkish shopping mall

I only fall once
*Audience cheers and applauds*

And, finally, this last very, very small piece is for my beloved, and she has been my safe haven and my stormy sea, which is not at all a bad combination. And, when I was telling that last story I got so excited I forgot to tell you the punchline, and that really fucks up this intro because if you don’t know the punch… So, I’m going to tell you the punchline. The punchline of that story is that Iona says to Taig, “So, where can I meet lesbians?” And, he says, “Marrickville.”

And, the punchline of this intro is that by sheer, I don’t know, strange coincidence, karmic coming downness, I met my beloved in Marrickville.

This poem is called She Wakes.

She wakes eyes Andaman green, hair sticking up
We are all thighs and elbows, kitten breath and scratchy nails
She holds my face in her hands says what does this mean and I, for a moment, I feel the sweetness in her
Her hands as strong as joy
Her swagger lynxlike jagger
The lines of her lashes
And the scar on her forehead
To hold tight
Despite the fault-lines the earthquakes the tsunamis that threaten
To hold tight to not give up to struggle with your anger and my grief and stay
And hold
And fight
And fuck
Despite the differences and the sameness
She wakes
She holds my back my bones
And I
I hold all that is and all that was and I do not care
If god exists
I just do not care
And so we tumble