George Tillianakis: We’re Not Allowed to Talk to George 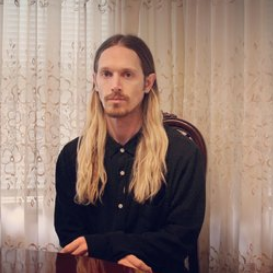 Hi. I’m Maeve Marsden and you’re listening to Queerstories – the podcast for the monthly LGBTQIA storytelling night I host and programme. This week’s story was recorded at a special edition of Queerstories at Volume 2017 Another Art Book Fair at Sydney’s Artspace. Next up – artist George Tillianakis.

It’s 1999. One more year ’til the apparent end of the world. The millennium. I didn’t really care. What I did care about was the routine I placed myself around March of that year. It was my last year of high school, I was 17, and I had practically failed or received low grades throughout my entire high school experience. All I cared about was indie music, reading Quentin Crisp, and being up in the art room making shit on my own. I had no friends that year. I didn’t speak a single word to anyone.

I decided that I would achieve something, and know within myself that I did my best. I locked myself in my attic of a room and hardly came out. Studying, and dreaming. Dreaming, and studying. Yoga, then orange juice. It was a ritual I never failed. I stopped drinking alcohol completely that year, and I haven’t touched alcohol since. But this focus and discipline came, and comes from a place of determination to never allow anyone to fuck with me ever again, and here’s how the story goes:

I wake up, eat breakfast, shower, brush my teeth, put on my school uniform. I walk to school, completely oblivious as to what is about to transpire. I am content with knowing that this would be my last year of eight years at this hell hole all-boys Catholic school. I’m early, and the 9 A.M. bell hasn’t rung yet. I could see and feel that the energy in the school was somewhat off. There was an avoidance. My attention to detail had not yet been heightened, but as I walked through, I saw students of all grades and ages wearing badges. I could not make it out. This badge was representative of something, but I deemed it fucking useless like most things at that school.

I walk over to where all the Year 12 boys sat and saw Con walk toward me.

“Why, what are you talking about?” I reply.

“Have you seen the badges?”

“What about the fucking badges, Con?”

“They have your name on them”

“We’re not allowed to talk to George.”

We’re not allowed to talk to George.

The assisting principal liked to gossip to his students. This cunt had asked me after I got punched by a footballer, what I think he should do to resolve people treating me like shit at the school. I told him, tell them they’re not allowed to talk to me. The school captain, a massive closet case faggot, disliked the idea of me being comfortable with myself, unafraid to be out at school from 13-years-old, got wind of what I told the Assistant Principal. Captain made the badges. Captain made badges for the entire school. And that badge was uncreative and ugly as shit.

Paul comes walking towards Con and I. I’ll never forget the look in Paul’s eyes as he walked towards me. They were wide and full of panic. It was almost like he was out of breath. Con and Paul were acquaintances, not friends. But, at that moment, I knew there were others in this world who could also feel compassion and sympathy, and not just hatred and disgust. Paul had just run from the staff room notifying the teachers of this hideous looking badge.

18 years later, I can now look back on this incident with humour but, at that moment, with Paul and Con in front of me with genuine concern, I burst into tears. Con and Paul took me up to one of the school interview rooms where I could be away from all these little arseholes wearing a badge with my name on it. My art teacher came in and told me to go home. My drama teacher did an interpretive dance.

Just kidding, I honestly can’t remember what she did, but it made me laugh whilst drenched in my own tears. But this makes me laugh the most: A substitute teacher really wanted to talk to me and offer advice. I didn’t really know her. I was so discombobulated and vulnerable that I simply allowed her to come in. As she sat opposite me, she gave the most useless information you could ever offer a 17-year-old who didn’t have a job, whose face was completely obscured with acne and lived a sheltered existence in a suburban ghetto with his Greek parents.

“Wanna know what I do when I get upset and have had enough with the world? I buy myself a ticket to New York City and disappear.

“When I feel better, I come back.” In my head, I was like, “Bitch, get out.” But, funnily enough, I spent 10 years on and off in New York City. Captain never lost his captaincy, and I never lost my sanity. Three years later, into my third year of art school, my mind has expanded a little. My sister is a gym instructor at the same gym Captain works at. Captain asks my sister if he can see me. I agree. My sister has prepared me for what will happen because Captain has already told her.

Captain is forgiven because Captain genuinely asked for forgiveness. But I will never forget. I will never forget because this experience shocked me into change forever. The end of the world didn’t happen when we came into the year 2000, but you’re still not allowed to talk to George. Thank you.