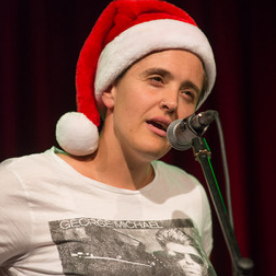 Hi. I’m Maeve Marsden and you’re listening to Queerstories – the podcast for the monthly LGBTQIA storytelling night that I host and programme at Giant Dwarf in Sydney. This story was shared as part of a Queerstories end of year celebration that I named Chosen Family Christmas. 2017 has been a tough year for queers, so it was lovely to come together and celebrate our weird wonderfulness on December 8th, just 24 hours after the passage of Marriage Equality legislation. That said, chosen family and queer family is about so much more than marriage, as the stories from that night show. Next up – Amy Coopes who is a med student and writer, but most importantly was my first girlfriend.

Nothing says chosen family in the queer community like becoming best friends with your exes. I invited Amy to speak because together we started a tradition of Christmas Eve chosen family celebrations 11 years ago, an event we make open to anyone who wants or needs it, a gathering of queers and allies who we love. Back in 2006, we were both struggling with our own families, and so we elected to get utterly wasted on Christmas Eve as a coping mechanism. As we traipsed down Oxford Street at 3 A.M., we decided we would always celebrate the season among our chosen family, and we have. Anyway, Amy decided not to share a story about how much she values my friendship, but I love her and it none the less. Enjoy.

I was very good at liturgical dance. In fact, I was good at lots of things that pious little Catholics should be. I had an angelic singing voice; I enunciated clearly and understood the need to pause for dramatic effect during prayers of the faithful.

I had the liturgical bell sequence committed precisely to memory, and I was so damn tall, the alter boys’ garments were an exact fit. Most importantly, I was good at liturgical dance. But I wasn’t a very good Catholic. Part of the problem was that I thought too much. I overthought everything. I anguished over what to say to the priest during my first confession. “Should I be truthful about my sins, or should I make something up?” Part of the problem here was that when I say I wasn’t a good Catholic I really, really wasn’t. The worst thing most seven-year-olds had done was lie to their parents about their homework, but I had actually been running a black-market business in the schoolyard with stock stolen from the storeroom of my parents’ shop.

I nicked toys and sold them at school for tuckshop profit, and it was a neat little business. These were sins one through three. When I got caught, there was sin number four – blaming my brother. I blamed my brother for everything. The more inconceivable it was, the more stridently I protested. Cat thrown into the pool? It was my brother. Window broken? It was my brother. Someone’s been in the peanut butter? There was only one person it could possibly be. Fascinating, given that there is a four-year age gap, so when he was scapegoated for my plush toy racket, he was three.

What if I told the priest the truth and he cursed someone to die for my sins? This was my best understanding of Jesus at the time. He was just in the wrong place at the wrong time when a wizard got pissed. But what if I lied to the priest? That was another sin. The curses were piling up. On the other hand, the rules weren’t that you had to confess your worst sin, were they? Technically I didn’t have to tell the priest that I was a prepubescent gangster. What if I told him half the story, what if I said I’d stolen a toy from my brother? See what I mean? I thought too much.

The sacraments didn’t improve. I ripped my stockings after falling out of a tree at my first communion and said the word “shit,” which was pretty much the worst transgression you could commit in front of my mother; unfortunate given she’d married a RAAF airman who had delighted in telling me years earlier that his natty little forage hat was a “cunt cap” and used to wake me up of a morning with the refrain, “Wakey-wakey, hands off Snakey.” I was, quite genuinely, 19 before I realised what this meant.

That’s why we’re still friends. But my sacramental forays would quite pale in comparison to my brother’s. For reasons I am sure are a mystery to you, my brother had an anxious temperament. Highly strung. Prone to the vapours. He would vomit at the slightest provocation, and with great regularity. Eating somewhere other than home? Vomit. A babysitter? Vomit. Going on holiday to Warner Brothers Movie World? Vomit. The only thing that could calm his nerves were Doritos, which seemed to be some sort of talisman, and on which for all intents and purposes, he appeared to subsist. My brother was probably a good Catholic, in the actual sense that matters, but the child could not do a sacrament to save himself.

My parents became a little bit lax the second time ’round, so he wasn’t baptised until he was four, and they didn’t make him wear the heirloom lacy gown, he rocked up in a tracksuit. We lived in Tasmania, so it’s fair.

While the priest went through the niceties, for reasons known but unto the Almighty, Himself, my brother decided to stick his head through the pew and, once he was there, he got stuck. In the end, they had to use the anointing oil to wriggle him free, and for days he reeked of myrrh. And vomit.

The greatest episode of Coopes Family Catholic lore, however, concerns his first confession. He’s a man of few words, my brother, and still waters run deep. He fretted for weeks about talking to the priest, and, had we noted the steadily-mounting pile of Dorito packets under his bed, we may have had a clue, but by that stage, I had hit puberty and was far too busy writing tortured journal entries about how fragile and misunderstood I was. There are a few things I distinctly remember about that day, and one was his bilious look of panic as the teacher herded him away to sit with his classmates in the front pew. He’d outgrown the yakking habit by then, but at that moment, I thought, “Sweet Jesus, he’s going to chuck.” To his credit, he kept it together until he took to the altar.

Sitting down on a little plastic chair opposite the priest, his weedy legs trembling. He looked at the man with unmitigated terror, let out a bloodcurdling scream and, quite literally, sprinted out of the Church. Like a contagion, about five other kids followed suit. “Shit,” my mum said, running after him, the standing-room-only Congregation staring in fascinated horror. Dad yanked me the arm and we followed in quick succession. Tim was hysterical, and no one could get a word of sense out of him until we were home and he had a bowl of Doritos in his lap.  Calmly, and with a glint in his eye, he alleged that I had told him if you got to the altar and you couldn’t think of a confession to offer the priest, his head would explode…

..like some sort of malfunctioning android powered by infant shame. Having a mental blank, he’d run for dear life. Tim: One. Amy: Zero. Check mate.