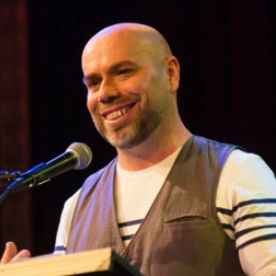 Hi. I’m Maeve Marsden and you’re listening to Queerstories – the podcast for the monthly LGBTQIA storytelling night I run at Giant Dwarf in Redfern, with support from the City of Sydney. This week – Guy James Whitworth.

My name is Guy James Whitworth and I am an artist. It is very important that I own those words and that I say them aloud to you. Please let me explain why.

I was a painfully uncomfortable and under-confident child who really struggled at school. I was a shy, short, effeminate and asthmatic, much to the vicious amusement of the other kids and teachers. It’s a familiar story I know, but I was bullied relentlessly. Basically, think Billy Elliot but a lot less adorable, with no sense of rhythm, no warm fuzzy ending insight, and the fabulous Julie Walters nowhere to be seen.

You’re in my pocket already, aren’t you?

To compound my lack of manliness, because of my asthma, at school I was taken out of all sporting activities, and I was literally sent off the playing field and told to just go sit quietly in the art rooms. Unfortunately, my home life was really no better, with a violent ex-military father to whom my lack of manliness was a constant embarrassment.

Even back then, to me, gender roles were more of a serving suggestion rather than a recipe to be followed down to the last ingredient.

It took me a while to write that.

And, long before passing became a thing, I struggled to understand why I had to. I was never male enough, always too girly. I could sometimes pass as a boy child, but never as a future man. And, others who celebrated their own obvious masculinity could sense it on me and took aim accordingly.

Long before self-esteem became a thing, I struggled to have any. Even my own name gave me grief, and I couldn’t pronounce my own name for years without mumbling or stuttering. The words “Guy” and “gay” were just too close. Too meaningful, too loaded, and being able to say it now makes me proud. It’s a nice name – Guy James Whitworth. It’s camp and it’s pretentious, just like me, but back then-

I’m still at that stage where I’m like, “Are they laughing with me or… “

AUDIENCE MEMBER: With you!

GUY: Thanks. You’re very kind. I would avoid any situation when I had to say my own name. I grew to hate my own lack of stereotypical masculinity, and I contemplated self-harming and suicide on a regular basis. I chose to carry the burden of all that bullying bullshit rather than inflict the grief that I would cause by ending it all. My mother knew of my battles and loved me as much as she could to compensate. My father knew of my struggles and I always thought, turned his back on me, but it’s only now that I realize he just didn’t know how to help, and that time must have been hell for him also.

I think we’ve kind of all got it, but just to recap, to sum up, it was a bit shite, really, wasn’t it?

My maternal grandmother was my first ever strong female role model, an absolute character and a very welcome ally against the outside world. Although she definitely wasn’t familiar with what I was going through, and I certainly never even heard her say the word “gay, in a way, she understood what was happening and tried to give me some tools to get through it all.

My grandmother would often use a local expression, and I need your attention now because this is where it gets a little fuzzy. Without her, I doubt I would actually have made it here today.

“Shy bairns get nowt.” In Northumberland where I grew up, “bairns” means kids or children, and “nowt” means nothing, so what she was actually warning me was, “Shy kids get nothing,” and it’s still my motto to this very day. It’s a mantra that I use in situations such as this. Even though I’m uncomfortable standing up here, I have to make myself heard now because I have something to say. And, as we’ve already established, “Shy bairns get nowt.”

Isolation is the opposite of community, yet isolation and community can actually both be equally destructive or inspirational. I was happiest when in isolation as a child. That was my almost comfort zone. When I was alone in the quite art rooms of my school, I felt safe and I was inspired. When I was out in the bigger community, that’s when I was in danger, and often had to run the gauntlet or get the absolute living shit kicked out of me on a daily basis.

Yeah, that was with me, that was good. That’s okay. I’ve got [inaudible]. I’m back in the zone.

Without knowing it, every bully who threw an insult or punch my way, in reality, was placing a tiny piece of fabulous armour on me. Every insult made me that little bit tougher and that little bit stronger and contributed towards a future of endless inspiration.

I left school as quickly as I could and went running straight to art school. Finally, other creative types. Yay! But I never actually studied art. I actually wasn’t brave enough to light the fuse of all of that backed up emotional trauma. I needed something safer, so I studied fashion. Nice, safe, shallow fashion. Fashion!

I still had decades before I would take my painting seriously, however, studying fashion did give me a start creating and did take me to London. It was the late ‘80s, and it was here I learnt to finally say my name and peek out from under the low self-esteem. I finally met other queer people, and it was here that I got to confirm, without a doubt, that penises were indeed my genitalia of choice.

Again, that took me a while to write that, but I’m pleased that’s in there now.

Now, I’d like to play a game. Do you all remember that feeling the first time you ever saw a queer person really own their queerness? Someone who was either so confident in their queerness or so fierce and fabulous in their alternative, “fuck you” gayness that it took your breath away? Do you remember how that made you feel?

For me, it was finally the ability to breathe and it was a chance to embrace optimism. It was a coming out, a coming home, and those were my glory years. Let’s just say there was a lot of coming, and we’ll leave it at that.

However, there was no quick fix for the damage done. Even now, still in my late… mid-forties, I-

Early forties, early forties. I still find myself in situations that I feel my lack of manliness holds me back, and I can still suffer from hideous low self-esteem and fear of the outside world. However, “Fortune favours the brave,” is another of my favourite sayings, and now my struggles are a lot less life-threatening. One of my ongoing struggles is achieving some kind of recognition in the “mainstream,” and by that I mean straight, art world, with constant rejections from both galleries and art prizes, as my work is seen as too “niche,” and by that I mean queer, however, it turns out all of those years of rejection and ridicule up in the North East of England left me rather strong and resilient, and I will not be sent off this playing field again, thank you.

My work now struggles to find its place in the world, and like so many of you sitting here tonight, it is considered too colourful, too bright, too alternative, and too “fuck you” to easily find its place without compromise. You know what I have to do: I just have to change the world. It’s a rather large ambition, I’ll grant you.

And, also, to go off-script for a second, if anybody wants to help with that world-changing, I would really appreciate it. Please do get in touch.

I think together we could possibly do it.

People who know about the art world tell me that I should embrace my dark side and that I should pull out the demons I faced as a child and put that darkness into my paintings. I paint portraits, and I am constantly told my portraits make people too colourful and that safer, more muted colours sell better, however, fuck that shit.

I get to choose the colours in the world that I portray.

You know what I said earlier about that feeling when you first saw a queer person really own their queerness? Well, this is the message that I’m channelling into my art and this is what I’m bringing to the world: Unapologetic fierceness, colour, joy, attitude, and queer love.

For all the little baby gays still trapped in Northumberland, my paintings are me giving back to that short, shart-

Sorry, “Short.” Oh, I knew there was going to be something, and I’ve only got like four lines to go. Come on, really? Okay. I’m back.

For all the little baby gays still trapped in Northumberland… This sounds like a nursery rhyme or something, doesn’t it?

Are you all tucked in safely? Okay.

Yeah, they’re laughing at me now.

.. my paintings are me giving back to that short, shy, strange kid back in wherever the hell it is we all come from. I can’t physically bring some fearless and confidant queer into the world of the bullied and beaten baby gays, but I can portray that defiant queerness, and I can capture that fabulousness, and make it accessible to those that struggle in a way that they can recognise, and they can follow out of the darkness of their bullied and abusive childhood.

Now, I never really had a comfort zone growing up, and although standing here and reading this really is certainly not my comfort zone, as you probably guessed, my community is here, and the queer community is now my comfort zone. You are all the fierce queers that inspire me, so if you don’t mind, I’d like to share that inspiration with the world.

My name is Guy James Whitworth, and please remember, “Shy bairns get nowt.”