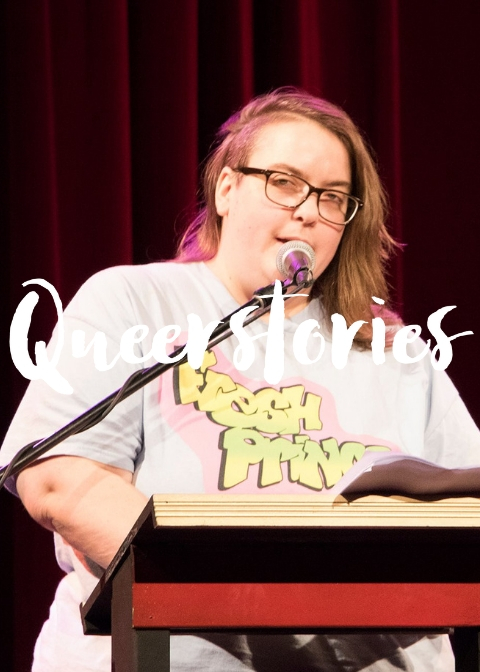 Hi, I’m Maeve Marsden and you’re listening to Queerstories – the podcast for the monthly LGBTQIA Storytelling night I run at Giant Dwarf in Redfern with support from the City of Sydney. This week, writer Rebecca Shaw.

My name is Rebecca Shaw, and I am a lesbian, hold for applause. Ahh I’m dumb. The thing I love most about Queerstories is that it really showcases just how diverse and different our community is, no matter how much society wants to put us in boxes, or try to weigh us down with stereotypes that often aren’t even true. Except for the stereotype that lesbians in their 30s named Rebecca reading stories out are universally adored. That one is extremely true.

It’s so amazing to hear stories from our collective histories, of paths taken, of struggles overcome – and it’s also nice to think about the next generation, and having the hope that there will be less stories of ‘overcoming’. But when I was a young girl growing up in Toowoomba in regional Queensland, I had to overcome a lot. First was my terrible personality. Then my extremely terrible haircut, which was actually only overcome about a year ago.

Besides those however, was the fact that every single day I was struggling against my sexuality and myself. I would push those feelings away, and wish that I were normal. Well, as normal as an extremely weird child whose favourite game was pretending to be a statue could be. That is sadly true, I would knock on the front door and when my mum would answer it I would freeze and be a statue. I am creative genius thank you. I would say “I am a statue”.

I used to spend a lot of time wishing more than anything that I would wake up one morning and suddenly the crush I had on my brother’s girlfriend would be replaced with a crush on a boy at school. That the interest I pretended to have in Scott Wolf from Party of Five would be real, and not just something I talked about to keep up the pretense while I thought lesbian thoughts about Neve Campbell from Party of Five. The 30 year olds know what I am talking about. That my love for Taylor Hanson wouldn’t be because for a couple of months I thought he was actually a girl. I would look at my female friends falling for boys throughout high school, dating them, and wishing I could be like them. Wishing that, like one of my friends, I would be lucky enough to want to lose my virginity in a gross Gold Coast hotel room to a sloppily drunk guy on Schoolies week while Mambo No. 5 played in the background on repeat.

Obviously those wishes never came true, and I ended up getting through that mindset, and coming out the other side happily never having had sex while Mambo Number 5 played in the background. Yet. Because I have now evolved, like an extremely gay Pokemon, to see the real truth. I now realise how truly misguided I was back then. Partly because ideally it should have felt okay for me to by myself, but mainly because I now know that straight women do not deserve my envy.

They deserve my pity.

Now obviously this does not apply to everyone, #notallstraightpeople, but I do believe that for a lot of women, terminal heterosexuality is to their detriment. Let’s look at the facts. Number one – they only get to date men. Number two – they don’t get to date women. These seem like similar facts, but it is an important distinction. Not only do you have to only date men, you also do not get to date women. It is a classic lose/lose situation, or much sadder version of Sophie’s Choice.

Don’t get me wrong; some of my favourite people in the world are heterosexual women. That is exactly why this issue is so important to me. As someone who exists in the world, I am extremely familiar, as you all are, even the straight men in the audience, with how terrible a lot of you are. But I, as a lesbian, have the privilege of largely being able to choose to avoid them outside of work and public spaces, using a system of complex underground tunnels via the sewerage system. This sounds disgusting but is still preferable to encountering groups of drunk straight men on the street at 11pm in Newtown. And so it is very difficult for me to hear the harrowing tales from my straight female friends about trying to open thousands of terrible men chocolate bars in order to find the rare worthwhile straight man golden ticket hidden inside. Current reference. And so I am here as the lesbian Willie Wonka, hoping to change their lives.

I have decided it’s time to use my spare time to instead offer these women my assistance. I have written a pitch to apply for funding to create a retreat for heterosexual women, where they will undergo a scientific program I have developed with the help of no scientists at all in order to attempt to “queer them up”. But unlike ex-gay therapies, where someone tries to turn another person heterosexual and take away ALL of their gay thoughts such as “When is the sequel to Carol?” or “Did I, a human woman, just cough up a furball?”, our therapy is not taking away any choices. We are not trying to take away women’s attraction to men; we are simply attempting to add queerness to it. It’s like if dating a man is normal water, then dating NOT a man is like soda water, which is better, but dating women is like adding in tequila and lime to the soda water – now you’ve got a party. So the option for women to still be attracted to and want to date men will still be there, it’s just our firm belief that they will not want to, given the slightest chance at all.

The pitch first discusses recruitment: Our recruitment will focus on heterosexual women who most closely fit the parameters within the principle of “queer 10/straight 5”. If you haven’t heard of Queer 10/Straight 5, it is a concept that describes the idea that some people who subvert or lie outside of the wider societal norms of what is attractive in the conventional straight world might be seen as more attractive in the queer world. For example,  if I had to appeal to straight men, I would be ranked as a negative 10 million according to male Facebook commenters, but luckily I get to date people in the queer community who more often appreciate diversity of looks, such as women who wear graphic t-shirts and jeans 100% of the time. We all know straight women like this; those who go largely unappreciated by men for whatever reason, but whom we all know would be in high demand with queer women. You can spot them easily in the wild – they are usually wearing a cardigan.

The pitch then focuses on some of what the program will cover. First comes the physical embodiment class – it is important for the heterosexual women to understand the scope of what is desirable to other women. This obviously can include dresses and high heels and makeup, but they are encouraged to try on other clothes that may not have previously appealed to most men, but will to plenty of queer women. So in a display that I imagine will feature as a fun dressing room montage in the film made about this successful program and my life, the attendees will try on an array of hats, boots, singlets, black shirts, and denim jackets. And denim jeans. And denim literally every other item of clothing. There will be a dedicated denim room that only plays danniminogue songs.

Women who wish to undergo the full authentic experience will also be given an asymmetrical haircut and septum piercing, but this is not mandatory.

Then comes the session that will either be called ‘Clockwork Lemon’ or ‘Clockwork Orange Is The New Black’. This is where the women will watch hours of nonstop footage of happy queer women, couples, purring cats, footage of Ellen dancing, gifs of Gillian Anderson, and the good parts of The L Word (so after Jenny dies). And of course then the final session example is the one where a scientist or academic comes in and shows everyone the studies and research on how many more orgasms women have when sleeping with other women.

I hope the pitch will be successful so we can start helping women Australia-wide, but worst case scenario, even if it doesn’t work – they will all get a nice break from men while on the retreat.