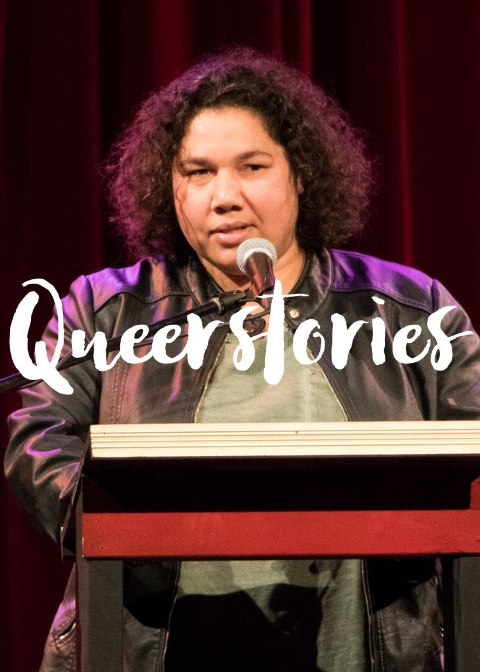 Hi I’m Maeve Marsden and you’re listening to Queerstories – the podcast for the monthly LGBTQI Storytelling night I run at the Giant Dwarf in Sydney with support for the city of Sydney. This week – award winning musician Jessie Lloyd.

I am an Aboriginal and Torres Strait Islander musician, been a muso for a while. Originally from North Queensland, my family come from Palm Island off the coast of Townsville. I grew up in the Church – Seventh Day Adventist. Didn’t last too long there but I’ve always been into music. At the age of 15 I was inspired to be a musician but I had to leave the Church to achieve that strangely enough. Other than that, my father Joe Geia is a very well known Aboriginal musician and he is considered a pioneer of contemporary Aboriginal music especially around the 80’s and 90’s.  He was the lead singer of bands such as No Fixed Address and went on to pursue his solo career and wrote the classic wrong ‘Yil Lull’ which is kind of like the Aboriginal national anthem.

So anyway I’ve been doing music for a while, I am 35 now and a couple of years ago I was listening to a couple of my Aunties sing. They go to Church and they usually sing hymns. They started singing a song that wasn’t a Church song and I said ‘Oh, what’s that song?’ They said ‘That’s the old song, the old song them old people used to sing from Palm Island’ They said ‘It’s about the boat’ Around the 1920’s or 1930’s there was a boat called the ‘Irex’, it used to sail from the mainland of Queensland over to Palm Island. And It was the boat that used to transport the Aboriginal and Torres Strait Islander people that were displaced and removed under the Aboriginies Protection Act. The Stolen Generation Children we call them now, but back in those days that was just policy. It is  a beautiful song, it is a first hand account of what those families were thinking when they were on the beach saying goodbye to their loved ones because they didn’t know if they would see them again. You can hear the intent that they were wishing them well and sending them on their way.

You want me to sing it for you quickly? I didn’t bring an instrument but here it goes:

When the Irex sails away across the sea

Leaving me, so far away

Know my thoughts will be of you

So farewell, til we meet again

You know that Irex song, I was listening to my Aunties sing and I was like ‘what is that?’ As I was getting older and more mature as a musician I could understand that when you hear a song it is like musical transportation. When them old people sing them songs for them in that moment you’re just on the beach with them in the 1930’s that’s the power of music. It inspired me, I gotta start looking for these songs because if my family have that one song, there will be plenty more from all over Australia. All the Aboriginal missions, settlements and reserves, native camps, fringes of towns where black fellas used to live back in the day. They must’ve been singing about something. A couple of years ago in about 2005 I thought I would venture off and I knew exactly what I was looking for. I thought, there came a time where our people used to live a traditional life and when they started getting moved around and removed and displaced they were severed from their cultural practice. They couldn’t speak language or sing traditional songs so what were they singing instead?

I went to Canberra, I went to the National library, the National film and sound archive, IATSIS down there which is the Aboriginal resource place and I’m not a formal researcher I’m just a muso and I couldn’t find anything. So I thought oh well, better put something together and make it accessible. So we have the Mission Songs Project.

Two years later I’ve been cruising around the countryside looking for these songs I get most of my material from elders – senior song men and song women who share their songs from wherever they’re from and you get that background story which is all part of it. You can sing a song but until you hear the yarn behind it it’s much more moving. My goal really is to revive these songs and put them in the public domain. Because music I believe is an opportunity to have beautiful and truthful conversation about who we are and what happened in the past.

I think that is a very hard conversation in this country. But finally these songs shed a little bit of light in the corner of Australian history that has never really been that accessible. My vision is to have Mission Songs Project revived and made public and shared among the Australian public, like ‘The Irex’ and ideally become a classic in the Australian song book along ‘Waltzing Matilda’. Just give myself a few small jobs along the way.

But that’s the big picture, it’s a lesson I think in maturity and adulthood that you can understand and accept where you come from and it helps to determine where you’re going. I think as a nation we might be coming to that maturity. You think so? I hope so. Simple little tunes like ‘The Irex’ might help bring that forward.

The other amazing thing about the Mission Songs Project in terms of research is that I research songs from 1900 to 1999 so there’s the last hundred years there’s a whole body of work that Aboriginal and Torres Strait Islander people have been composing and performing. Like 4 to 5 generations of cultural traditions, song traditions, outside of a traditional lifestyle. When I started looking into it, it’s a beautiful example of how there’s a continuation of song traditions from traditional days of practicing traditional culture, in to contemporary modern Aboriginality. The last hundred years provides evidence that proves that we still practice the same song traditions in various ways, the only difference is that we sing in English and play on a Western instrument. But the song traditions still remain – such as passing on songs from generation to generation, each song has a purpose and a meaning to do with social, environmental and cultural change and relevance.

Back in the day when they had song lines you’d sing them songs and you’d follow stars or geographical locations and it would show you how to go find water or something. I don’t need that now I just go to Coles right. But the mission songs talk about things like being an outcast half caste. They talk about things like surviving on rations and the food. You might be only living on bare bones. Or songs during the war and our people couldn’t go for a drink with their mates after the war and how they survived. So that social relevance on how we survived. And if it wasn’t for grandparents and great grandparents a lot of us wouldn’t be here today because of those songs of survival. So that’s a good example of continuation of song traditions.

I really do think that the Mission Songs are a new genre of Australian music. Which is really exciting. I am really excited, I think it’s only the privilege of my generation that I can be curious about this stuff. It was my parents and my grandparents that suffered the Mission days, I didn’t. So it is important to acknowledge the privilege I have now and the way that they did what they had to do to pave the way.

Also an important thing – people always come up to me and say “Oh I went to some remote community in the Northern Territory and I sat in the dirt with the Elders and it was amaaazing.” I don’t want to take the piss out of people who say that but it is a very uninformed position. What about the Koori’s down the road? You know? It’s the same. I am hoping the Mission Songs Project can debunk a few myths about the Black Fellas that are right in front of you. Instead of this fairy tale land of living in the enchanted forest you know?

Anyway I’m raving, ranting. I am going to finish up now. **Crowd cheers, calls out for more music** Another song? Alright. I know! I’m going to have to read it because I always forget it. It’s an accapella song. It’s a really cool song. I hope you guys check out Mission Songs Project if you get the time. If you buy the CD that would be awesome. The good thing about the CD is that some of these songs have never been recorded in the last hundred years they’ve just been hanging around on the ‘mish. But they’re there. And also there’s a song book with lyrics and chords so I’d love to invite every body to learn these songs and be in the Choir, get the Choir to sing it. It’s a part of keeping these songs going for another hundred years that’s the goal.

For this song I am going to need audience participation. **Audience start clapping to a beat** This song is from Darwin it is called Mission Food. Back in the day the Black Fellas used to get the shit food. And the porridge had weevils in it. You know what weevils are aye? In your flour.

Put it on the stove and turn up the heat

Put it on a damper you can’t go wrong

And blessing little me

We be on a treacle just you see

Put him in a tea

Only I drink him up

Sent from heaven must be good.