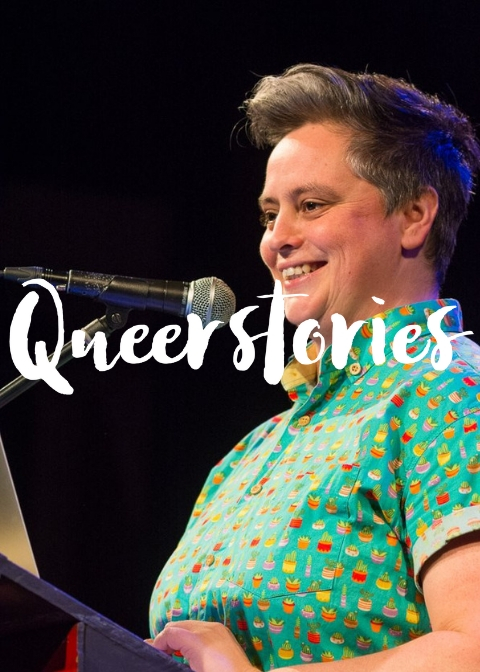 Hi I’m Maeve Marsden and you’re listening to Queerstories – the podcast for the monthly LGBTQIA storytelling night I run at Giant Dwarf in Redfern with support from the City of Sydney. This week – comedian Geraldine Hickey.

Sup fuckers. Here’s a story about a recent gig I did that I did not enjoy as much as I anticipate I’ll enjoy this one.

The gig took place only a week ago at a Football and Netball Club in Frankston. I don’t know what the Sydney equivalent is, but it’s bad.

I was told it was a fundraiser for the club which is why I said yes to the gig in the first place. I imagined a roomful of community minded people coming together to support their local football and netball clubs. I’ve done plenty of these types of gigs before and I relish them, they provide a good time, cans of beer and party pies. I’ve also done ‘Comedy Nights’ at football clubs. These are different. These are the gigs where I’m thankfully at a stage in my career where I am able to say ‘Get stuffed’ to these gigs. As a woman, as a gay woman, there is no doing well at these types of gigs the best you can hope for is survival both figuratively and literally.

A room full of 30 to 40 men that have just played a game of football are 10 cans of bourborn and coke deep and are only a few hours and a group rendition of Flame Trees away from wrestling naked on a cricket pitch before hitting the town to grab some pussy is not a place I want to be. I didn’t have to worry about that though because I was told this wasn’t one of those gigs. It’s a fundraiser.

But then I walked in to the room I very quickly realised I had  it was indeed going to be one of those gigs.

I was introduced to Troy the President of the club. Troy was a bloke that if you wrote him as a character in an Aussie comedy about blokes being mates trying to get sheilas it would be too much. We shook hands and he crunched my fingers so hard I had to massage them for a few minutes to get the feeling back. I said “Fuck you’re strong” He laughed and apologised saying “I forget sometimes but I hate a soft hand shake” We all do mate but I like my fingers they’re very important.

Troy offers myself and the other comics a drink and he does this by turning to me and saying “What do you want a quick Fuck?” “Nah, (it’s a shot) I’ll be right thanks Troy I’m driving I’ll just have a beer” Troy came back with our beers and started telling us a bit about the club. “Yeah so we’ve got the women’s team that started this year, they played this afternoon, so they’ve been here for a bit, about half of them probably munch the motor, I don’t know though. Yeah and the boys played later so they’ll be here soon enough.”

I laughed so much “Munch the motor” that’s funny. The phrase and the fact he felt I needed to know that there were possibly women on the team that did it.

Later he felt the need to talk about poofters. “Yeah I don’t mind poofters, like I’m not one but there’s nothing wrong with ‘em. I mean I kissed one once but I’m not a poofter”

Troy couldn’t understand why I decided to drive an hour to a gig where there was plenty of booze that I could drink for free and spend the night with drunk football players. I convinced him it was because I didn’t want to spend $40 on an Uber. “Oh well” he said “Yeah sometimes we head into this nightclub in town it’s an over 28’s. Tell you what! More fluff there than a Laundromat”

The MC for the night asked Troy for the inside goss on who everyone hangs shit on and why. This sort of ammunition is invaluable at this type of gig because essentially all the fellas want is that audience is to have a bit of a laugh at their mates, and some systematic lifelong damaging bullying . Troy was only to happy to oblige “Oh yeah see that young guy over there with the hat on” he says pointing to a group of young men wearing hats. “That’s Bailey. He can’t crack a fat”

It’s at this point where I think you’ll all agree Troy is the gift that keeps on giving.

“How do you know?” we asked “Like does he tell you or is his girlfriend bitching about it to her mates and it’s coming back around? “Nah nah he’s telling us. “You know what it’s like the lads get a touch of the map of Tassie they can’t keep their mouths shut about it.”

I’ll admit it was around this stage I started looking for hidden cameras because I didn’t think Troy was real. Troy eventually left us as he had to go attend to other matters and by other matters I mean sink 6 cans of CC and Cola. What a bogan.

The comedy started eventually and it went exactly how I thought it would go. They were rowdy and paid little attention to anything that was been said unless it was directed at them. I stood up the back I tried desperately to think of any material I had that could possibly work. The problem with these gigs is they like blue material. They like all the swearing, the sex, the stories about getting blind and doing something fucked. They love it, but not from a woman. There is nothing that can be said because you are not seen as equal. As a gay woman it’s even more confusing because they can’t even look at me as a sexual object. Ah she’s got tits, but she’s wearing trousers!

I once did a gig at a plumbing supply company’s annual golf day which had been washed out so instead of playing golf they opened the bar and drank. There was over 100 people in that audience. The only women there were the wife and daughters of the man that owned the company and the 2 women carving the roast. Two minutes into my set a bloke sitting in the front row leaned over to his boss and said ‘Get her off! This is disgusting!” At the same time the women and a few of the guys were losing it. They were howling with laughter so I ignored everyone else in the room and played to them. I finished the gig, copped some sexual assault when a guy grabbed my breasts. I pushed his hands away but he had 3 more cracks before someone else came along and changed his focus to a fresh beer. The wife apologised wholeheartedly for the way I was treated on and off the stage which was great but it didn’t do much to alleviate my anger and frustration. This was only made worse by the other comic that was on, having no comprehension with what I had to deal with and telling me I just needed to work on my material. It’s alright it’s shit.

So my plan for this gig was to ignore the drunken lads and play to everyone else in the room. The lads had other ideas though. They didn’t want to ignore me, they wanted to poke me and watch me fail. They didn’t know I’d dealt with this shit before and I more importantly I didn’t care for their approval. In the middle of a really great bit, like it’s a proper good bit, where I mention I’d like to see a whale, when one of them piped up with “You should see Baza’s whale!?” They all errupted in laughter and hi fived each other. I interrupted them and said “Are you trying to tell me Baza’s got a big dick?” They roared “Yeah it’s this big”

“What about any of this suggests that I would want to see a dick?” I ditched the fucking whale bit.

“I’m actually quite frightened of dicks, I’m also frightened of spiders” what a seamless segue. The new bit was going ok but they were fired up and I couldn’t finish a sentence without one of them gleefully repeating what I just said, or offering what they thought the punchline should have been. The next bit involves naming the different parts of the female anatomy. “This is your mons pubis, labia majora, labia minora. They didn’t know where to look and could barely sit still. All of them nudging each other and behaving like teenagers. I yelled “Oi, pay attention. This stuff will be very helpful for you. Don’t be embarrassed by it. Accept that it’s happening. Shut up, look me in the eye” They laughed but they were laughing at something I’d said and they were showing a tiny amount of respect by actually giving me some attention. I mentioned that I have hair on my mons and I caught one of them roll his eyes and look away in disgust. I hooked in. “Don’t you look away in disgust because I have hair on my mons” He pleaded his defence by going “Nah nah I love hairy women. I like it when there’s hair there”

“Oh well thanks very much but what makes you think that any woman out there gives a shit about what you think about their mons. No woman needs your approval and I’m certainly not leaving my mons natural because there’s a 22 year old amateur football player out there that likes hairy women”

“You’re scared? I have a genuine fear of being raped tonight”

We all laughed, but the women there knew. They knew. The guys all thought it was hilarious. I finished up and I cannot tell you how relieved I was that it was not only over, that I survived, but also that I did good. It is such a relief when you finish a gig like that and people aren’t avoiding eye contact and saying things like ‘you been doing this for long?’ and ‘so what else are you doing for a living?’.

Troy had one more crack at convincing me he was an arm wrestling champion and that they might have a bit of a comp later. Sounds fun Troy but I have to get going. He went to shake my hand, is it alright if we don’t shake hands? You’re too bloody tough. We laughed and said no worries. I went home safe and sound. The end.