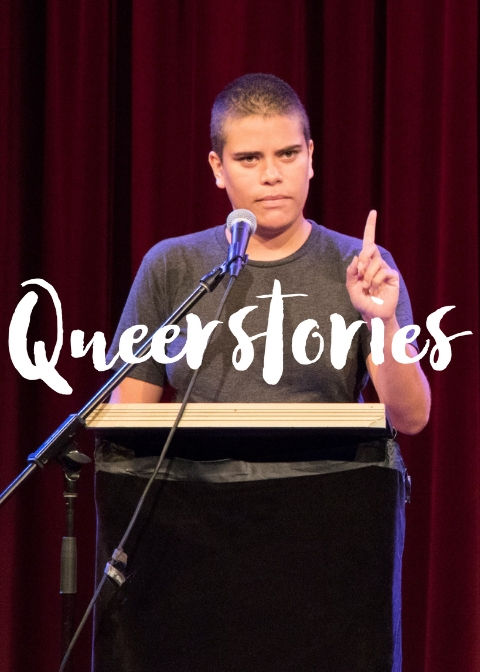 So, my name is Nayuka and I’m a Kurnai/Gunai, Gunditjmara, Wiradjuri and Yorta Yorta woman. So for those not up to scratch with their black geography and went to school in the Australian public education system you probably don’t know where any of those mobs are from. So basically I’m mostly from Victoria and some of my mob is from up here in NSW as well.

So it’s April basically, and it takes me a long time to process things that happen. I think I’m finally ready to talk about 2016. I just need help from you loving audience to figure out when exactly was the lowest moment in my life in 2016. If thats ok. I have started seeing a new therapist, and it might help him to know whats going on. So I’m just going to quickly rip through some things that happened at the end of last year and then we’ll do a little vote, and the winner gets a prize? I’m the winner?

So anyway, I kicked off last year in Berlin. It’s a bit of a habit of mine to fuck off to Berlin and have a good time because you know you don’t have to be around people. And also theres this weird pressure on New Years Eve to have the best night of your life and invariably you end up at some fucking weird party. And not having a good time. And then you catch a cab back home and then you vomit and then you drive past the Brisbane Cemetery in Toowong and the guy is like “oh I like to play acoustic guitar in there and people think Im weird”. So those things happen and you’re like what the fuck. So I just fuck off.

Anyway the next day I was paying the price to the party gods and I was in and out of sleep all day. Spent all day of Jan 1 in day just sleeping, occasionally waking up to listen to some sad music, then going back to sleep. Checking to see if my brother was still breathing and he was. One of these people I was snap chatting was this Serbian dude, he was like a labourer or something. We met on tinder and then like every modern romance it quickly went to snap chat. He told me that ‘this is the biggest dick you’ll ever experience’, and I was like ‘ok bitch, like sure whatever’. There was a bit of that talk, I fell asleep and then I was dozing in and out. It was New Years day so it was a public holiday or whatever and he had to go find condoms to fit his allegedly enormous penis.

Apparently he was walking around Berlin looking for condoms and I was dozing in and out of sleep being like ‘yeah I’ll be there in twenty minutes’, so I never went. I was just not in a place to go and I didn’t want company either. So he got real pissed off because I basically stood him up several times throughout the day. I woke up to a snapchat story basically, it started off with him smoking a joint. Then it was a picture of his erect penis, he actually wasn’t lying, I’m actually really glad I didn’t make it. Yeah. So there was that. And then it was him wanking and then the crescendo was a solitary tissue with his semen on it. I assume it was his semen, not someone elses I don’t know.

So that was the start of 2016. Invasion day which is January 26 its the same day every year. Also tinder – met this white dude on tinder so I went to his place and he went down on me. I later realised I had thrush which I still have to see this piece of shit around. I’m probably the piece of shit but I didn’t know I had thrush at the time, but we live two streets away from each other and I see him up and down Smith st every so often. The little bitch just doesn’t make eye contact with me, just averts his eyes like, ‘can we just be adult, I’m sorry about the thrush!’.

There was also the other time during NAIDOC week which is the first full week of July. There was like for one of the first times in Melbourne, a queer party night at the laundry bar in Fitzroy. So I went to that, and I don’t often wear underwear because I don’t like underwear. But this particular night I had my period, and I didn’t wear underwear and I had a tampon in. So I was dancing and I was having a great time and I looked on the ground and I saw this, surely that cant be that’s a bit gross! Anyway so I saw this used tampon on the ground, and was like ‘ew’. It took me ten minutes to clock ‘oh fuck that might be mine’. Initially I was really judgy, like how dare this person! This is a public health issue. How dare you. Went to the toilet and had a bit of an exploration and as it turns out it was mine. So that happened. I did still get laid that night so thank you.

So a couple of weeks after it was Thursday. My house is mostly queer so Thursdays are good because its Thurs-gay. We live around the corner from the place where Thurs-gay happens so we have a few drinks on the balcony. And then, well this is what we think we are going to do… we’re going to have a few drinks on the balcony then we’re going to go to YaYa’s and have a dance, and we’ll be in bed so we can go to work the next day. Didn’t make it beyond the balcony. There’s a twenty metre walk between my housemates room to my bedroom and I’m right next to the bathroom. And I got so drunk but I needed to piss and I was on my bed so I just pissed the bed. And I was sitting up and I was awake. I wasn’t. And I can still hear the dripping. That happened.

A couple of months after that I go in and out of Tinder, I’m off now for reasons you’re about to hear. I go in and out. Ok cupid is real hard its too much. Its a lot. I don’t have enough data to download much else. So its Tinder. I went to Europe a few months ago as was aforementioned. Fucked off at the start of the year to have a good time. I downloaded tinder again. I hate talking to people, I don’t mind this talking but that talking is really hard. Like when you have a conversation.

So I was like fuck talking to people at bars and shit. Fuck that. I’m in Europe its where white people come from but I have needs. So I downloaded tinder. I was going to pay for it so you can do the thing where you talk to people in other countries. I was project managing my trip my trips sexual experience.

I was also talking to people back in Melbourne because why not? And kind of went on a bit of a frenzy. And then I got banned from Tinder. Tinder banned me. I have been told the filthiest things on Tinder. I don’t know what Ive done. I did a lot of drunk Tindering. Tinder are fucked, they can be really transphobic they can be really shit. In this case I was utterly confused. This was in December, and I thought this is rock bottom. I cannot access Tinder and not only can I not access it but I am genuinely upset. I am so hurt right now. This is the bottom. I am crashing.

And then I emailed them, I am the Rosa Parkes of the 21st century. I sent them an email and was like ‘yo guys this is fucking unjust. This is so rude and so probably racist. My ancestors did not lose their lives so that I could be banned from Tinder. Rude’. Maybe this is rock bottom. Then I got a reply and they were like ‘you violated the community standards’. And I was like ‘what the fuck did I do?!’. And I thought about doing an expose into Tinder banning but then I was like fuck maybe Ive done something really fucked, and then I write this big piece for the Guardian ‘it’s really unjust’ or something and then I start this change.org petition like ‘get Nayuka back on Tinder’. Then they pull a Centrelink and they show all the receipts like, that might be an obscure joke the Centrelink thing. Because Centrelink release data when someone made fun of them for being fuckheads and they wrote about it. Anyway Centrelink are real shit. So I thought ‘what if they do that?’. I’ve told people in a really fun and friendly way to sit on my face on Tinder, but what if its more than that. I don’t know anyway. So apparently I have violated the community standards of Tinder. Perhaps thats rock bottom.

Or maybe its like in the final days of 2016 when I, I was in Brisbane and Mama was thirsty. And because I was banned from Tinder I just messaged friends and said do you have any eligible people for me to sleep with please. I need to have sex. A friend hooked me up, shoutout Jackson, and I slept with this dude at the park. We met at the bar with a whole bunch of mates and then it was like ‘Oi, lets get this show on the road’. So we walked down to the park. It was actually Musgrave park which is like a sight of enormous political activism for black people so I felt a bit weird about… I still feel some type of way about that.

So we were having sex and he was real drunk. It was just, it very possibly is the last sex I will have with a CIS man. I think it was in this moment I realised I’m just not into CIS men. It came to a stop because his dick went flaccid. But I’m not a quitter. Like no we can fix this. Not to pathologise people losing erections and stuff. I haven’t had sex in three months this is so bad for my personal brand. I really wanted to make it work and just trying to squeeze a flaccid dick into your stuff, it doesn’t, its not a good time. Eventually lets just call it. You know what lets just go back this is not fun for anyone. So we went back to the bar.

The next day I kept finding dirt in my earholes. Inexplicably the only place I had dirt from that evening were in my ears, and my iPhone charger hole. So there was dirt there. A few days later I missed my flight to Paris so… but I made it over.

So that was 2016. I don’t think theres enough time to vote and I don’t want to. Thank you for listening it’s been a real pleasure and thank you.