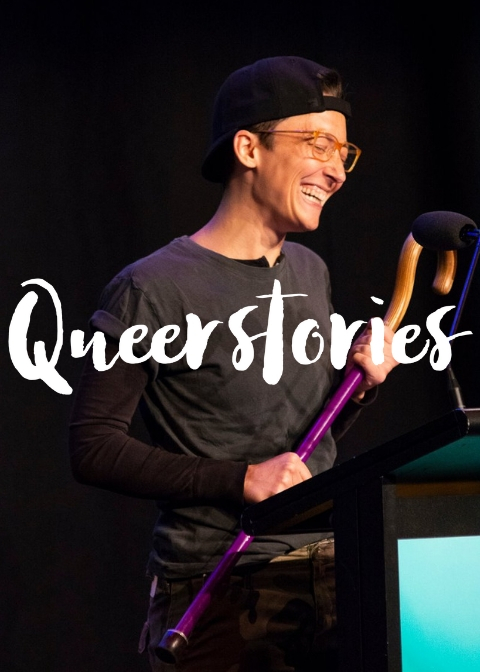 Hi, I’m Maeve Marsden and you’re listening to Queerstories the podcast for the LGBTQIA storytelling night I host and program. I run Queerstories regularly in Sydney, Melbourne and Brisbane as well as one off events in other cities and towns. Check out maevemarsden.com for dates and details.

This week, Liz Jackson is the founder and president of the Disabled List – a disability design self advocacy organisation and With – a fellowship that matches creative disabled people with design studios and other organisations. Liz performed at the Queerstories book launch at the Sydney Opera House as part of the Antidote Festival. She was brought to Australia to speak at that festival about disability politics so it was really lovely to have her perform at Queerstories as well.

My friends call me The Sleeper.

Once 7 o’clock hits, I can sleep anywhere. Loud bars, fancy dinners, even weddings. I remember like 10 years ago, my partner at the time and I were heading home on the subway when I fell asleep. Well, I don’t remember falling asleep so much as I remember waking up to a man repeatedly announcing “two negatives don’t make a positive”. Even in my delirious state, I was able to rouse myself enough to lift my head from where it was nestled on her shoulder and whisper in her ear “yes they do”. I had been thinking back to my elementary school multiplication lessons. I probably should have opened my eyes, because she whispered back to me “he’s talking to us”. Jolted awake, I took one look at the enraged man sitting across from us and suddenly I understood. He was using addition.

I thought for a moment and then I pulled out my phone, because I had to film this for posterity. And as soon as I hit record, the man took apart the box that had been sitting at his feet, I’m convinced it had actually been holding bibles. From behind his box, he continued shouting “two negatives don’t make a positive” as the rest of the train began to defend us by saying “leave them alone!”. And that’s when I saw it. His arm reached out and wrapped in front of the box and he decided to defend his honor by recording me recording him.

I’ve not had much interest in dating since we broke up, and so I was surprised to discover I had a crush on someone who was in London. It was a perfect situation, I lived in New York, so I never had to see her and she was always six hours ahead of me. Perfect for The Sleeper. I happened to be in London some months after discovering my feelings and she invited me for a drink. I knew this wasn’t going to go anywhere, she was very much straight and I was very much petrified of her. But I can still recall the exhilaration I felt when she put her hand on my leg. To me, it felt big. It felt like just the right amount. I didn’t want anything more.

I was on another planet as we left the bar, electric, until some guy, a funny man if you will, decided to impress his friends by mocking the way I walked. I had never seen it before, another person’s impression of me. So I stopped and I watched him as he clobbered down the street around the corner, until all I could hear was laughter. When I turned back, I saw my crush well ahead of me, she had missed the entire thing. Where’d you go? She asked. Those guys they were making fun of me. She was enraged and wanted to chase after them. But I asked her not to. So we parted, her apologizing profusely for something she hadn’t done as I crawled into a cab. On the ride back to the hotel, I discovered that the overwhelming feelings of moments before had crumbled into shame. I had never thought about dating while disabled until that moment. And I knew I’d never be able to laugh with her in the way I still laugh with my ex about “two negatives don’t make a positive”. The guy wasn’t making fun of us. He was making fun of me.

Around this time, I don’t remember if it was before or after funny man, but I discovered I had Tourette’s. It has been a powerful discovery, one that has helped me better understand some painful experiences I had long ruminated over. And so I found the discovery to be healing and held it close, it was mine. Something for myself, and rarely spoke about it.

Until I met someone in New York. I felt an immediate and profound connection to her and felt such joy in telling her about the minutiae of my life, including my newfound Tourette’s diagnosis. For a variety of reasons, mostly my feelings, it didn’t work out. But I held out hope until months later, when I was scrolling through my Twitter feed and saw a Tweet that said “I wonder if our Mr. Trump has Tourette’s”. I had been going through a phase where I unfollowed anybody who called Trump crazy or nuts or other stigmatizing terms, because it made hate myself. I prefer to just hate him. And when I went to click ‘unfollow’ I realized the reason it appeared on my timeline was because she had liked it. To say it crushed me would be an understatement, I couldn’t feel my hands.

But here’s the thing. She’s not a cruel person. I’d even go so far to say that she has built a career off of being kind. It took me a while, but I finally reached out to ask her why she liked it. She apologized profusely and assured me that she hadn’t been thinking at all about me when she clicked the like button. But dawned on me. I’m not the only sleeper, we’re all sleeping.

When I shared the initial draft of this talk with Maeve, she highlighted a joke I had written and asked if I could make the joke more inclusive of trans people who might be in the audience. It was a throwaway line where I referred to vaginas as being negative, because two negatives don’t make a positive. I mostly just thought it’d be funny to say vagina on a large stage. But here’s the thing. I am here tonight because of and with a most darling friend that I truly adore. Tea. And she’s trans. I flew halfway around the world, to do two things. To give some talks and to spend time with Tea. And somehow I managed to exclude my friend from my talk. We’re all asleep. All of us. Well, perhaps everyone but her. She’s awoke.

I had a painful run in with my crush a few months ago. Tea was there to witness both the situation and my face absolutely crumble in astonishing glory. Afterward we went shopping. And Tea bought me this shirt. Because I’m utterly convinced that I am hard to love.

Good night! [She turns around and walks away, the shirt says Hard To Love]